Audio description: a multicoloured collage. A young blue-eyed dark-haired man in a dark blue shirt is standing against a pale background. This is Mikhail Rubanov. He has an open face, a direct and confident gaze, a slight smile on his lips. To the left of Mikhail there is a book entitled On IOs Accessibility, to the right, in an orange circle, there is an image of a dodo bird with a large beak.

Visually challenged people are actively using smartphone applications. However, not all such software may be used non-visually. To change this situation, Russian national standard (GOST) on digital content accessibility was completely updated in 2020. Certain recommendations were given in it to help website and applications developers adapt these products so that they may be used by persons with disabilities. Moreover, in May, the book On IOs Accessibility was published. It tells about the experience of mobile apps adapting for such purposes. It was written by Mikhail Rubanov, developer and Head of Mobile Dodo.

Vladimir Vaskevich, the Special View portal correspondent, interviewed him and learned how the book was created and why adapting mobile apps for all users is profitable for companies.

From Inaccessible To Accessible

Audio description: a coloured photo. A fragment of an episode on an innovation technologies channel. Valentin Petukhov, the channel’s commentator, and Anatoly Popko, are sitting by a white brick wall. Open laptops lay on a table in front of them. Anatoly is wearing a blue shirt and large dark glasses. Valentin, a heavily-built blue-eyed man with broad and thick beard and a mustache is telling something to the channel subscribers.

Mikhail’s story started with a YouTube video. He watched a video by Wylsacom, a videoblogger, where the consultant Anatoly Popko was speaking about the way sightless persons used iPhone, MacBook and Apple Watch. From this episode Mikhail Rubanov learned that sightless people were actively applying various mobile services to order food, transfer money, listen to music. He discovered that any such software could be made accessible for people with visual impairments.

“I got very interested in this topic and started going deeper. At first, almost everything was hard to understand: how sightless people were using their smart phones, how Voice Over behaved, how program scenarios could be structured”, says Mikhail Rubanov.

The developer was sure that there had to exist ready for use scenarios and solutions to provide accessibility, that they were described in books and specialized websites. However, it turned out that in the Russian segment of the Internet there was no such material, and on foreign websites it was quite superficial.

“From the experience of such big foreign IT companies as Facebook, Apple and Google, one can see that there the issues of application accessibility are paid much more attention to than it is done here, by Russian IT giants. But even among the USA resources I couldn’t find a manual on solving problems concerning apps accessibility. That is why I had to start from scratch, try my own hand and find optimum solutions by trial and error. Fortunately, I was given room to work — it was Dodo Pizza mobile app, and moreover I had the support and approval of the company itself”, the developer told us.

For deeper understanding of user scenarios from the point of view of a visually impaired person, Mikhail Rubanov contacted sightless software specialists, Armen Khatayan and Pavel Popko. They helped in giving answers to some of the questions. Mikhail even wrote several articles together with Armen concerning IOs-based mobile apps accessibility for sightless people.

However, even this was not enough. “The next stage of my work was my presentation during a digital accessibility course which was organized by Valeria Kurmak, inclusive design expert. By that time I had been working a lot on the Dodo Pizza app and testing my ideas on it. That is why for my speech I prepared a huge presentation, a little short of 500 slides, where using examples from the Dodo Pizza app I dwelt upon different tasks and ways of problem solving”.

There was much material Mikhail Rubanov wanted to share, so after the course he started thinking about how to present the information in a more convenient form. Thus came the idea to write a book.

What Is In The Book 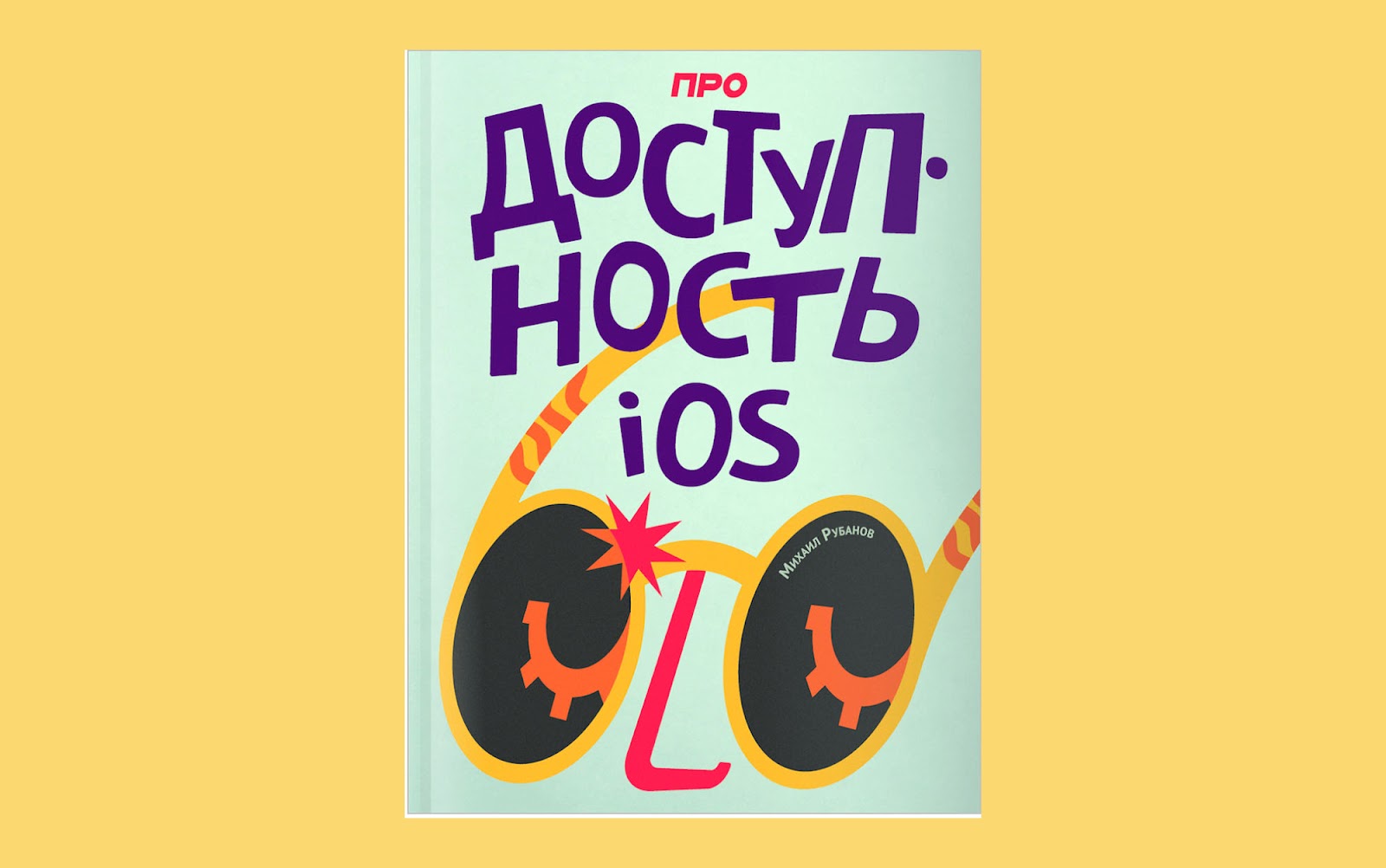 Audio description: a multicoloured collage. A copy of the book On IOs Accessibility against a pale background. The title of the book is written on a light-coloured cover in large purple letters. Dark glasses with bright-yellow rims are drawn under the title, closed eyes are sketched over the glasses.

According to the author, if he had a good example of solving one or another programming issue, he always described it in his article. While working on the Dodo Pizza app, he accumulated a lot of material, that is why writing the book On IOs Accessibility was no difficulty for him.

“Many developers and software experts have heard of VoiceOver, but they do not know how it works and what to do with it. In my book I tried to tell how people with different disabilities use mobile apps, what their needs are, how one can develop and adapt all this. The book is published in digital form and contains 200 pages, but there is not that much text in it. Mostly it consists of pictures with specific examples and analysis, which will allow the readers to start turning the acquired experience into tangible results”, Mikhail Rubanov says.

He adds that from the book the readers will learn how to organize correct navigation in the app, why it is important to mark all the buttons, why simplifying the interface is essential, how to test your app and so on. Certain chapters will be dedicated to Voice Control option, working with text adaptation using Dynamic Type, and Switch Control.

The book has several unique features. Firstly, it will be published in portions, each new chapter will come out once a week. According to the author’s idea, this will allow the readers to get an understanding of the material, use the information in their own apps, and also complete the tasks given at the end of every chapter. Secondly, the book turned out to be very illustrative because each next step is followed by an image with an example from the experience of Dodo Pizza app adaptation.

“The book is structured so that people, having read it through, could get their own ready-to-use adapted solutions. If there are any difficulties, I am ready to actively help my readers adapt their software. Any of them can send me a screenshot and a description of the control that is causing problems, and I will analyze the ways to adapt it and publish my analysis. Thus we will collect a library of widespread and complicated solutions on IOs accessibility”, says Mikhail Rubanov.

You can address your question to the author or learn about the coming out of new chapters of the book using Dodo Mobile channel or through Mikhail Rubanov’s social networks.

Why Companies Need To Adapt Applications 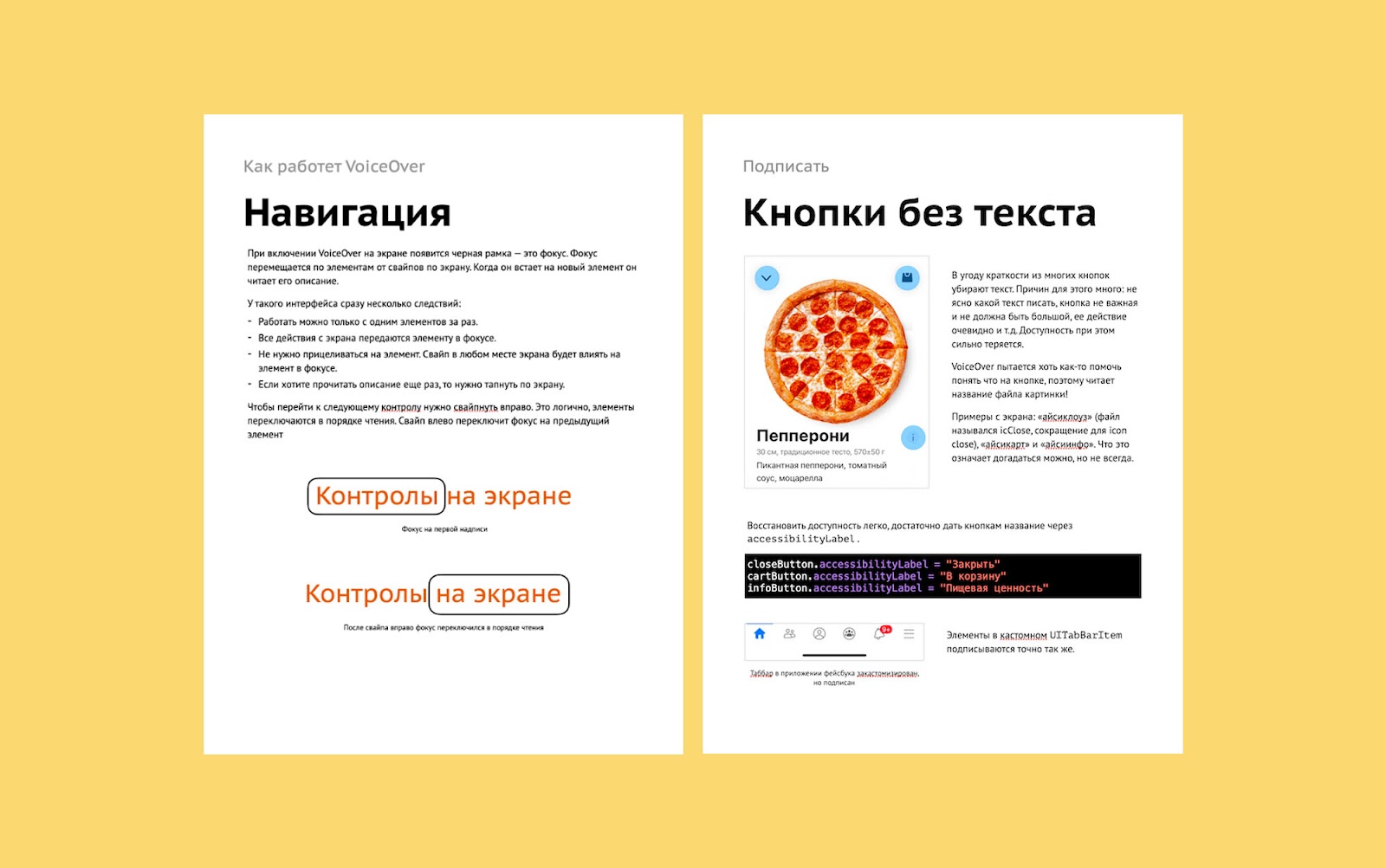 Audio description: a multicoloured collage. Screenshots of two pages of the book On IOs Accessibility are placed in a row against a pale background. The text is typed in black letters, examples are highlighted in red. On the left page there is Navigation chapter which contains the instruction on control via voice app. To the right, there is the chapter entitled Buttons With No Text On Them and an image of pizza.

In the author’s opinion, given time, creating accessible applications for people with special needs will become a common task for socially-oriented businesses. Every company is struggling to attract new customers, and for many people the accessibility of an app may become a key factor when making a choice.

“In the Dodo Pizza app we are gathering statistics on how often our clients are using its accessibility features. For example, font adaptation and text magnification functions have been recently used by 23% of our customers. Based on their orders we can see that such clients’ conversion rate is 5% higher compared with that of other byers’. While ordering pizza they also use Voice Over features, although not that regularly, but we know for sure that these clients have acquired what they wanted through a convenient and friendly interface”, tells Mikhail Rubanov.

In the course of work it also occurred that while creating an accessible design for sightless persons one can improve the design for all types of users.

“The first thing that we learned was that it was crucial to mentally understand our user’s expectations. Let me explain this using a simple example. Many software developers never think twice on where they should place Close button. They stick it wherever they like, on the right, on the left, in the end or in the beginning of the screen. But people expect this button to be in the place where Back button is usually found. Maybe it is not very ergonomic, but it is expected. We also gave much thought to the ways of adapting complicated screens of payment and delivery tracking when pizza has been ordered. Having considered everything, we decided to get rid of extra graphics and simplify the interface. At first we did this to make the app accessible for sightless people and then we understood that thanks to this even visual usage of our app has become much more comfortable”, the developer says.

According to Mikhail, adapting any application is not very labour-consuming, and furthermore, it does not cause any extra financial burden for the company. If a company sets such a goal, accessibility of an application may be enhanced during one workday, for example within the framework of a company’s hackathon. However, if you need to create an application with maximum accessibility, it will take more time, from two weeks to a year. But thanks to the book, software specialists will not have to be learning bits and pieces.

“In the future, we are planning to broaden our experience, because there is also the Android platform. There are still questions about organizing website accessibility. We have much work in front of us. But our priority now is to translate the book into English, so that Russian cases may be used all over the world. Because in our country programmers can create and actually are creating many products at a very high level, including cool designs. And now we have made a quality step-up in accessibility sphere as well”, Mikhail Rubanov says.

To learn more about the book, you may follow the link.