Audio map: what is it and why is it needed?

Audio description: photo collage in color with a white icon of a loudspeaker placed over the photo in violet shades. The photo shows a young brunette man wearing black glasses, white t-shirt and sneakers. He is walking down the stairs, holding a white cane in front of him.

Marta Lyubimova is the teacher for the blind, the orienteering and mobility specialist and the columnist of the “Special View” web-portal. She tells, why audio maps are needed and how to use them.

Audio map is a highly advisable thing for a visually impaired person setting on a journey, yet not a must-have. What is an audio map? It is a route description providing thorough step by step instructions. Again, this is important: the audio map is not just a description of the route, but a very specific algorithm of actions that you need to take to get from A to B with a cane. The audio map can be written in various ways, depending on the objective and situation — it can come as an audio track, can be typed in Braille or recorded in an electronic format.

Who can compose an audio map?

Anyone, who understands well, how the route for the visually impaired people is written. Audio map is not just a description of the surroundings, rather an instruction. While sometimes even a simple area or place description might be helpful. Audio description: photo in color. Cloudless summer day in the city. A blond girl wearing black glasses and light dress is standing by the stairs leading down. She has a white cane in her right hand and with her left hand she holds the leash of a fawn labrador. A multistory building with glass facade is seen behind them.

What is to be included into an audio map?

The algorithm of the audio map creation was proposed by Wendy Sheffers from San Francisco State University in 2002. We will now look closely at a slightly revamped version.

First of all, the audio map can be universal and suit for anyone — for instance, if it is created by an organization working with visually impaired people. Or it can be individual, if such an audio map is recorded for a particular person.

Most commonly, the audio maps are created for the individual use. In this case the author of the instructions knows specific difficulties that a blind person might face, so he can write the most challenging parts in greater details, give additional explanations and recommendations. The length of the instruction for the end user depends on the peculiarities of his/her perception and memory.

The audio map has to include:

1. Greetings. If this map is an individual one, you can welcome a person by name.

2. The aim of the map. Here you need to explain the starting and the end point of the route, you can also give a short description of the territory or area, if necessary, as well as any other vital information about the route. 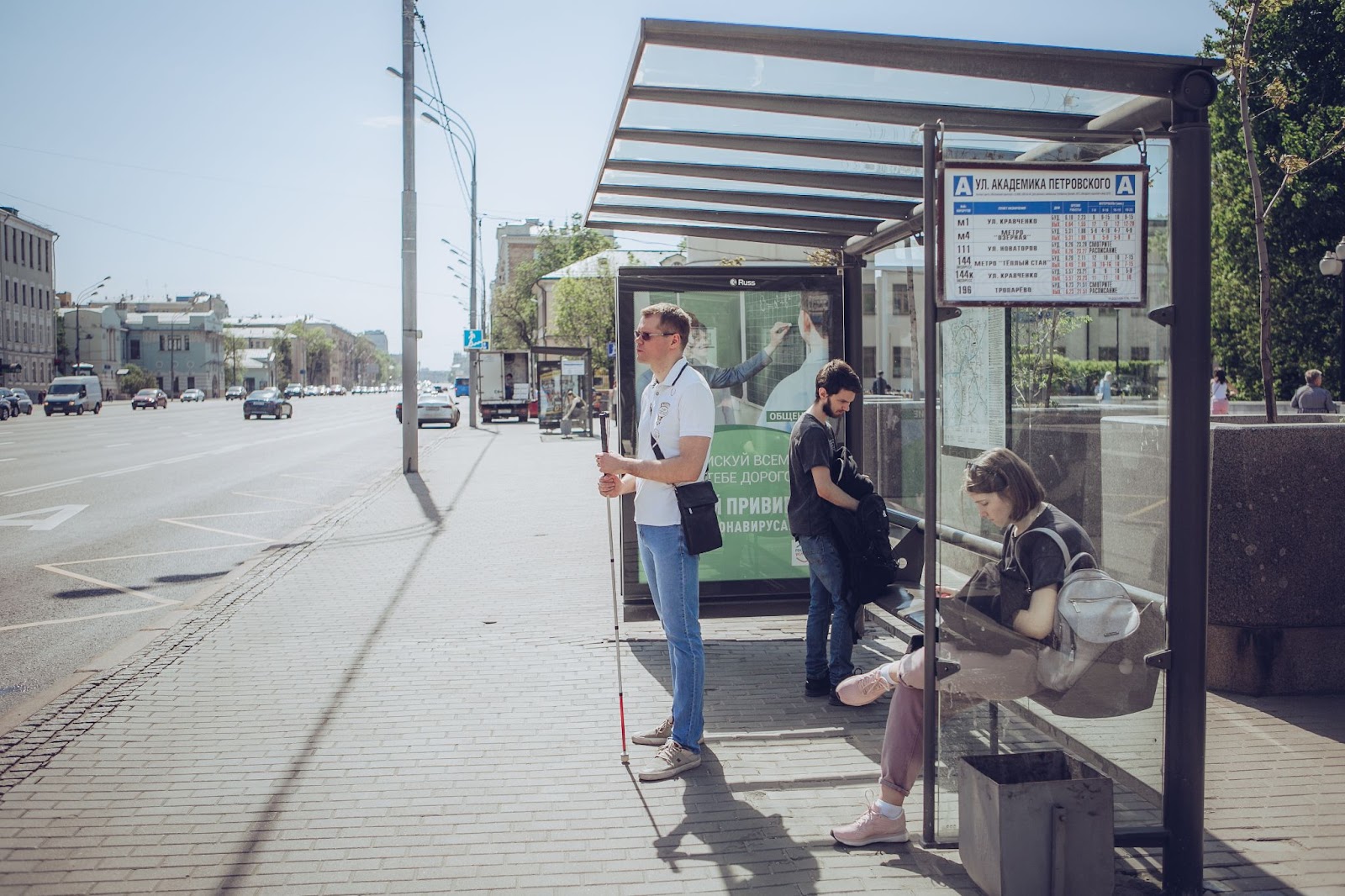 Audio description: photo in color. Bright summer day. Three young men are standing at the bus stop. Among them — the above mentioned brunette guy wearing black glasses, white t-shirt and jeans. He stands facing the road and leans on his white cane. There is a white sign placed at the bus stop, with large black letters saying “Akademika Petrovskogo Street” and a list of bus routes.

4. Instruction what to do if a person gets lost:

5. Common warnings about moving in the given area.

6. List of mobility skills that a visually impaired pedestrian will need on the route, such as the use of the cane techniques, defensive techniques etc.

Important: it is impossible to create a good audio map using online maps and never visiting the real place. Even if you study several route options and spend a lot of time on working the route out, there is always a chance you miss something and will need to elaborate the route further after it has been tested by the visually impaired pedestrians.