Turn the sound on: sound descriptions for silent films

Audio description: a shot from the black-and-white movie “Golden rush”. Charlie Chaplin, in the role of Little Tramp, is sitting dressed in a dark coat, a vest and a white shirt with a tie. His character has big eyes, thick hair parted in the middle, moustache above upper lip. He holds something in his hand, with his pinkie gracefully sticking aside, and eats with appetite.

Until recent times the silent films were considered inaccessible for sightless people. Such films naturally have no sound, and the viewers with visual impairments lost that important piece of culture, once called “the purest form of cinema” by Alfred Hitchcock.

Finding the way to solve the problem became the task for students of Digital Accessibility School and their leader Ivan Borschevsky, the audio description specialist. They created an audio description for “Le Voyage dans la Lune” (“A trip to the Moon”) by Georges Melies. “Special View” tells, how this was done.

The black-and-white movie “Le Voyage dans la Lune” was shot 120 years ago and broke all the possible records: this was the first science-fiction movie in the world and the most expensive one for its century. George Melies, the film director (as well as the lead actor in his movie), was the founder of the first ever film studio and the first one to use special effects in cinema.

And that’s not all. It was George Melies who created those titles-descriptions, which appeared in the films in the beginning of the cinema era. Special “storytellers” explained to the viewers what was happening on the screen.

Contrary to popular belief, the silent films were never totally silent. During film showing, the professional sfx (sound effects) specialists and even big symphonic orchestras supported the picture with sound. 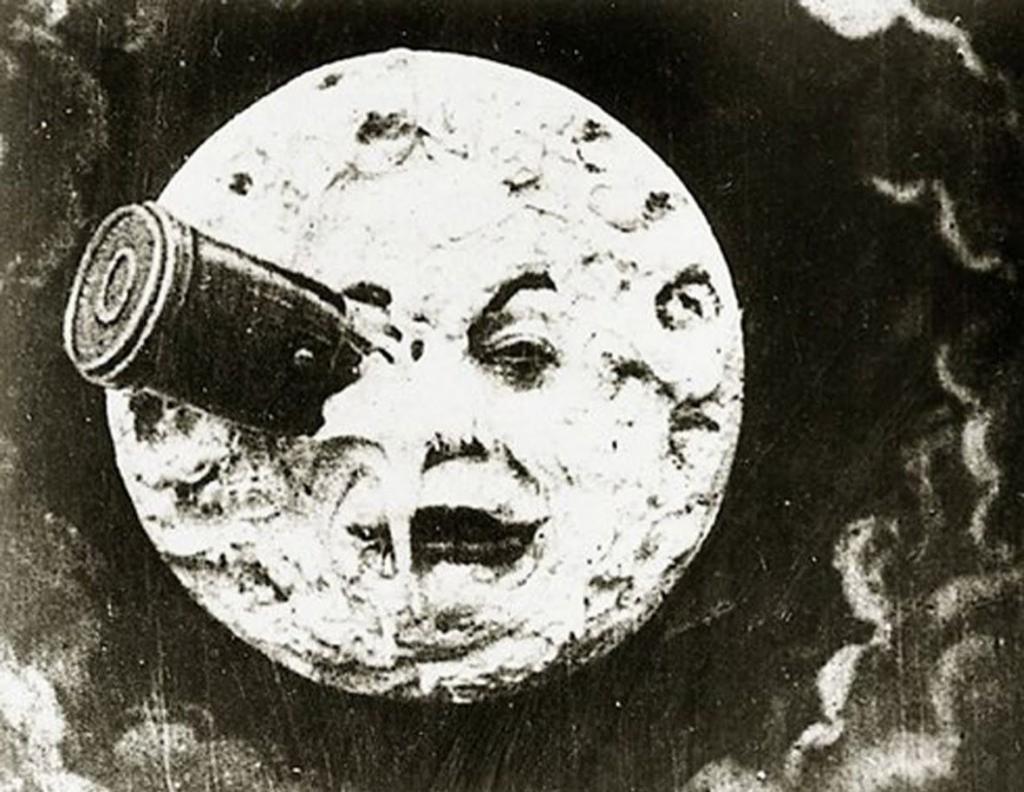 Audio description: a shot from “La Voyage dans la Lune”. There is the full light Moon, heavily cratered, with a human face, seen in the dark cloudy sky. The Moon has bright thick lips, wide eyebrows. There is a heavy shell stuck in the Moon’s right eye.

Digital Accessibility School at Eurasian Subtitlers’ League decided to recreate the atmosphere of the first cinema shows and supply a silent movie with audio description, for the very first time.

Ivan Borschevsky, project leader: “Silent films are an important element of the cultural heritage of any nation. ‘L’Arrivee d’un train en gare de La Ciotat’ (‘The Arrival of a Train at La Ciotat Station’) and ‘L’Arroseur Arrose’ (‘The Waterer Watered’) are one of the first silent movies and are still referred to by many directors, for decades already (take, for instance, ‘A Man from the Boulevard des Capucines’, a Soviet movie).The characters performed by Charlie Chaplin are widely known by any viewer in any country. The Soviet silent movies became an integral part of the education curriculum of filmmakers across the Globe. And this is the spiritual treasure that all the sightless people were deprived of for so long.

People must have access to any information, no matter how well they see. That is why we see our mission in making the maximum of information available for the sightless people”. 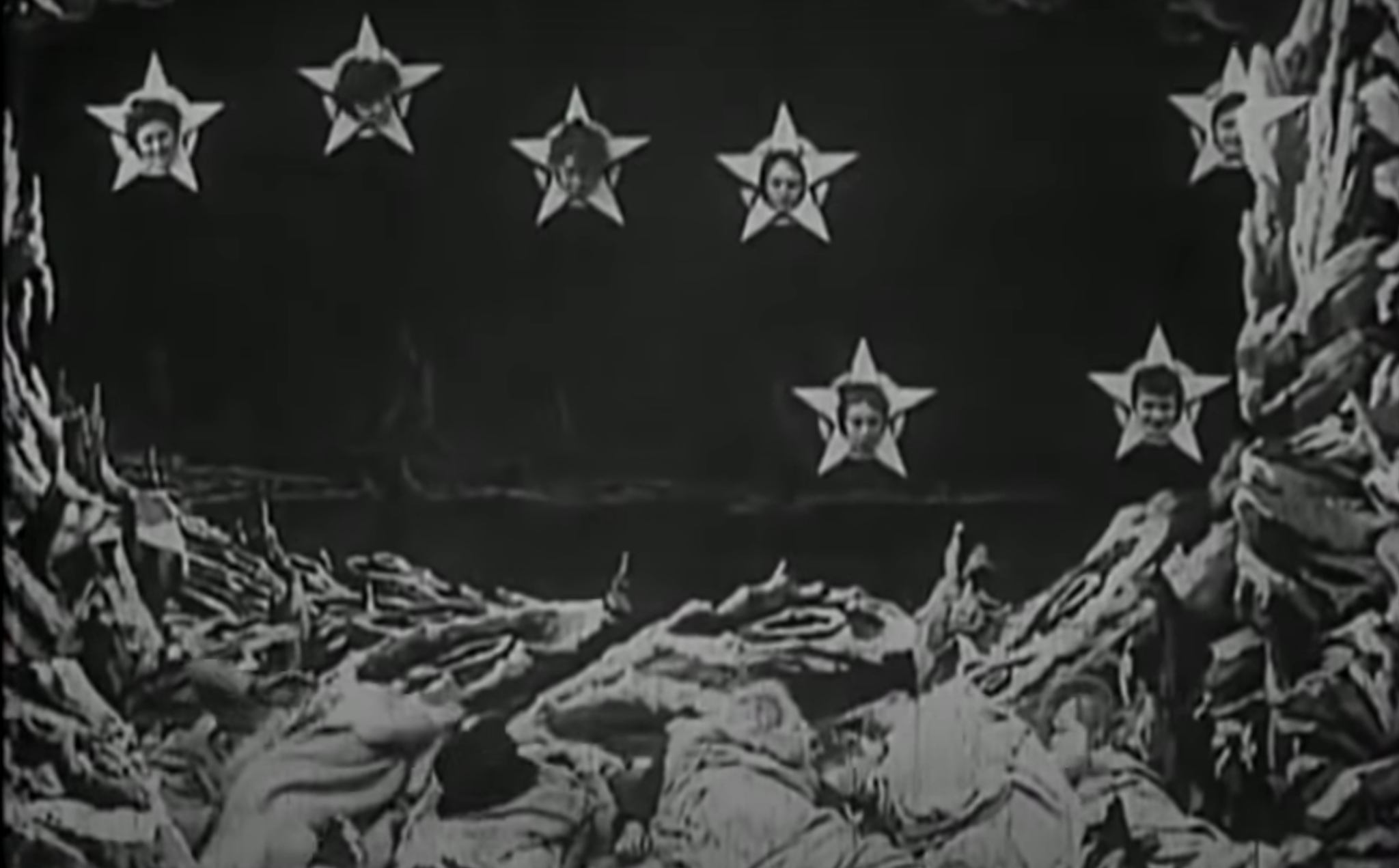 Audio description: a shot from the silent movie “La Voyage dans La Lune”. The Moon surface, cratered and covered by oddly shaped cliffs. In the foreground there are some people lying, wrapped into blankets. The dark sky shows 7 five-pointed stars with female faces, composing the Big Dipper.

The audio description for “La Voyage dans La Lune” was created in just a month. The film was divided into few fragments, and each student described his/her own small movie piece. After that they gathered all together, shared their own variants and discussed the full story.

You may say: one and a half minute per person — that’s not that much, right? Well, it depends. The work reached quite a good scale, and Ivan Borschevsky considers it a science project.

Ivan Borschevsky: “It was executed this way: I took the role of the editor. First, I made a list of movie frames and put characters and locations inside the frames. This helped to be consistent in describing the scenes, so that ‘a coat’ didn’t change into ‘a jacket’, for example. We worked online, so everybody could see the work of each other. Then I edited the final text and made amendments, after the text was checked by advisors”.

The movie turned out to be unusual not only for audio description writers, but for the viewers as well. Some sightless people said afterwards — that was strange, I lacked soundtrack.

Roza Aslanyan, sound description specialist: “That was so exciting. As for me, it was very uncommon to work with a film, where there was no text — which is usually the main subject of our work, and it was impossible to rely on any supporting sounds providing some additional information. I mean, normally, in an ordinary movie, there are, let’s say, the sounds of a hummer, or the sea, or a ship’s horn, or even applauses, coming behind a dialogue or a comment, and a viewer will decode them. It will help a viewer to draw the full picture, even if those sounds are not crucial for the overall story. As for the silent movie, you have to explain literally everything, so that the viewer gets the full picture”.

Here is a practical example. In a silent movie you will not hear any names of the characters. How will you let the viewers know, who is being mentioned in the scene?

Imagine: in a wide shot, in silent movies’ best tradition, a large group of people is actively moving and gesturing. The actors are not able to talk and try hard to convey the director’s idea.

The team of sound descriptors had a lot of reflections on that. In the end, the film version with sound description features no names of the characters at all, although they were stated in the scenario. The exception was made only for Professor Barbenfouillis — the vivid central character, performed by the film director himself. Thus, the sound description specialists managed to save some time and guide the viewers.

“A spacious hall full of astronomical equipment welcomes a number of astronomers in their long black robes”, — that’s the beginning of this fantastic story.

Galina Anegova, sound description specialist: “I got the very first 2 minutes of the video. Although the film was silent and didn’t have any text lines, the biggest issue was to define what exactly was the most crucial to be described to make the plot clear and to make sure such explanations came as concise as possible. I guess, all of us faced same problem. After Ivan checked my part, I realized I missed a few moments, for example — I didn’t describe the appearance of the ladies, who went out to welcome the astronomers”.

During their work, the creative team studied the scenario of Melies’ movie, Russian film-prose (film libretto, recitation) of the beginning of the XX century, as well as publications devoted to the film language of “Great Mute”. Every sentence got verified and rewritten several times. Why? The thing is, the sound descriptors don’t just describe what they see. Their task is a lot more ambitious.

According to Ivan Borschevsky, you cannot simply apply the practices of a talking picture to a silent movie. It has its own rules of the game: all the descriptions appearing in a film give to a viewer some additional information, non-obvious details, that might have escaped viewer’s attention. Sure, the sound descriptor doesn’t have the right to explain and interpret the director’s idea, but who will ever notice a tiny inscription in Latin, carved on the pedestal?

Emil Uldanov, audio description specialist: “I got the last one and a half minutes of the film. To be honest, this was my first experience of watching a silent movie. For me it was very unusual to watch a film with no voice, meaningful sounds and noises. Probably because of that it was still hard to get the plot of the story and the relationships between the characters, even after I had watched it for 3 times. Once I read the text description of the film, that was composed by George Mieles himself, a lot of scenes and locations in the movie became clear. For example, there was an inscription in Latin on the statue’s pedestal, saying ‘Labor omnia vincit’ (‘Work conquers all’), but you would not notice it in the movie. Also, the poor quality of the black-and-white video sequence bothered me a lot, so I had to go forward and backward in the video frame by frame”.

Such an accurate and careful approach was indeed reasonable, since in cinema every single element needs to serve the bigger picture and provoke specific emotions. But will these emotions be same for a sightless and a sighted viewer? Two consultants — Pavel Obiuh and Margarita Melnikova — decided to check the accessibility of the sound description text for a potential sightless viewer.

Their advice helped a lot. For example, they had questions to such a phrase: “The page girl addresses the astronomers”. How does she address them? Are her lips moving? Is she gesturing? Turning towards them? Such questions helped to make the description more precise.

Margarita Melnikova, consultant: “I had very few comments, since the sound description text was excellent: concise, clear, literate and correctly written. I enjoyed a lot working with the text and watching the final film, with sound description, later. I am pretty sure about the importance of creating sound descriptions for the silent movies — this will allow people with severe visual impairments to get closer to those cultural elements that seemed to be inaccessible or hardly accessible for them in the past”.

All the members of the project worked for free, including the actor Radik Muhametzyanov, whose voice was recorded for sound descriptions.

In the end of August “Wikipedia” amended its article about the movie “La Voyage dans La Lune”, saying that today the movie is available with the sound description. The film appears in YouTube and RuTube, and the first group showings of the movie were already held in libraries for sightless and visually impaired people.

The team planned to publish an academic article, describing their theoretical and practical learnings, that they got during the work. However, the amount of the material was so impressive, that it resulted into a book called “Audio description for the silent pictures”. It might be interesting for translators, audio descriptors, sound and sign language interpreters and filmmakers. The book is available for everyone for free.

Currently the book is in press, since there is a separate edition planned — printed in Braille. The book is being translated in English, Latvian and Kazakh languages, and there is an ambition to have it translated into German, Spanish, Arabic and Chinese languages. Thus, the manual book will become international — same, as the silent cinema itself.

The book is truly unique — it includes texts of film recitations, reflections of the sightless viewers who visited the cinema showings in the beginning of the XX century, thorough analysis of the silent film’s gestures and much more.

Today the territory of the silent cinema is still unexplored for sound description specialists. There will be more “expeditions”. Ivan Borschevsky, for instance, is going to explore Russian silent movies, which are available for public view.