“The road chose me”. Sergey Alekseev – a visually impaired traveler – talks about his walking trip from Armavir to Baikal.

Audio description: photo in color. A sunny day. A slim man in dark glasses is standing on the lake’s shore. This is Sergey Alekseev. He has short light brown hair, sharp face, short white beard. He is wearing black shirt and jacket and grey cap. Light transparent waves are rolling on the shore.

In October 2021 Sergey Alekseev, a traveler with Group 1 vision-impairment disability, finished his trip from Armavir to Lake Baikal. He covered more than 5000 kilometers on foot. He traveled from April to October with a handcart and the very minimum of vital things.

Vladimir Vaskevich, a reporter from “Special View” web-portal, talked to Sergey and learnt why he set out on such an unusual and long expedition, what difficulties he had to face along the way and why he didn’t reach the end point of his planned route.

In a dead end

When I first reached Sergey, he was in Kurgan, and in 2 days – in Tolyatti already, and he handled the interview from Cherepovets, a different place again. That time he said his next stop would be St. Petersburg. While just half a year ago he complained he felt lost and in need of a new goal for life.

“You can say, I was pushed towards my trip, and you can say as well that the road chose me. The fact is that one moment I found myself in a dead end seeking out for support and some new goal. This goal took the form of a big walking trip to Baikal, and I dreamed about going there since childhood”, - Sergey explains.

In his teens, Sergey actively prepared for army service, practiced martial arts and fencing. When he was 14, he got injured while training and went blind in one eye. In the next few years, he has almost fully lost sight in the second eye.

“Today I only have 3% of sight in one eye. I can’t call myself totally blind, but I am not visually impaired as well, since I have Group 1 visual disability, meaning I really cannot see much. These sight remains are enough to understand where I am, take care of my day-to-day matters and use a bit of smartphone”, - Sergey says. 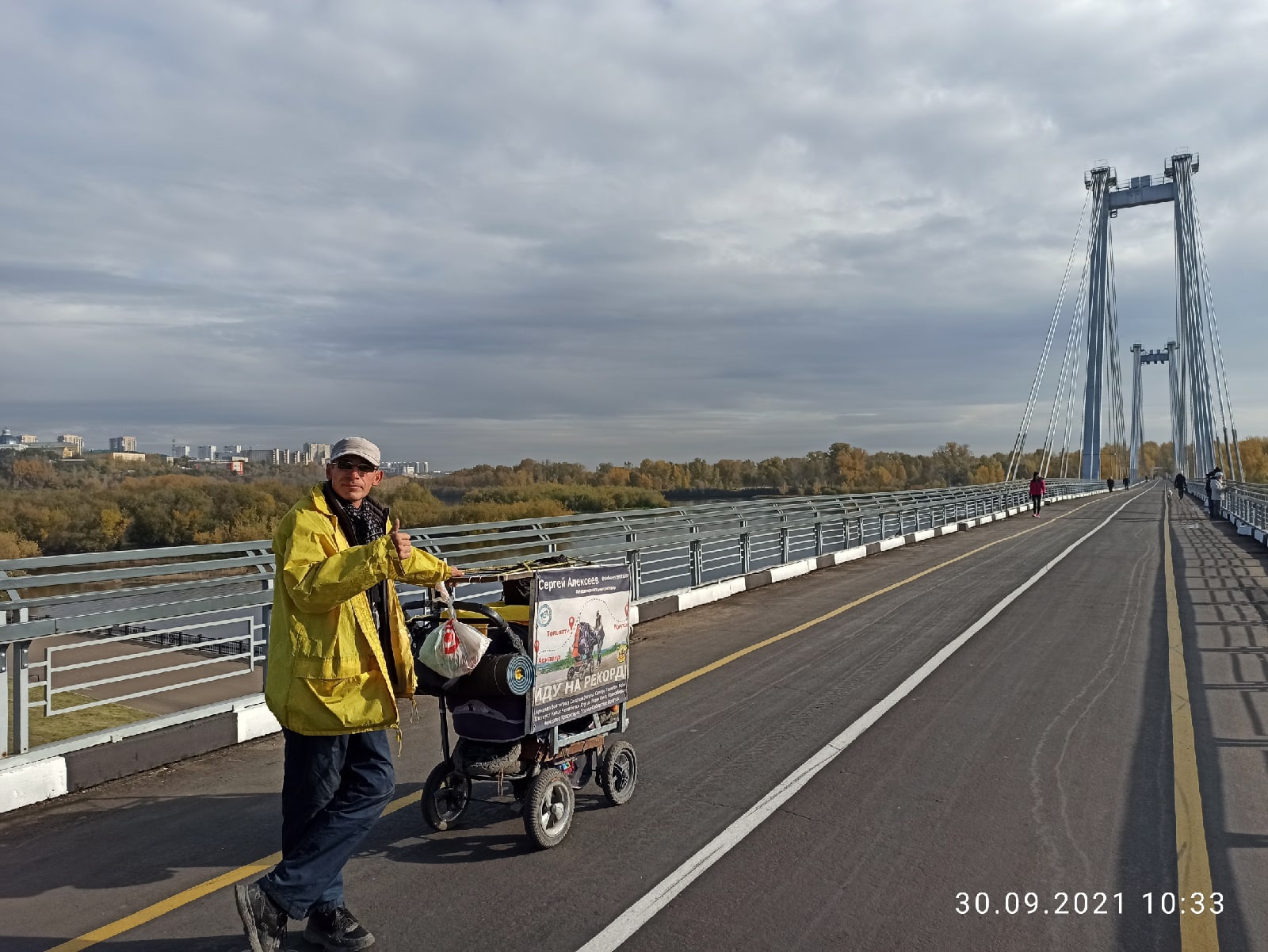 Audio description: photo in color. Gloomy autumn day. Sergey, wearing grey cap, yellow jacket and black trousers, is standing on an automobile bridge. With his left hand he is holding a baby stroller packed with things. There is a colorful banner attached to the stroller, saying “Sergey Alexeev – striving for the record”. There is a lake seen under the bridge, with a wide forest line behind. Some skyscrapers are seen in the distance.

Sergey shares, that he came across a lot of difficulties after he lost his sight. For many years he couldn’t confirm his disability officially, and in the end got only Group 2 disability. He registered Group 1 disability just recently. Finding a job was also an issue. Being a professional forester originally, Sergey already managed to perform as a plumber, a carpenter and an electrician.

“Nobody is interested in my skills and expertise. And one of the employers directly said he would not take a disabled employee, under any circumstances”, - Sergey Alexeev tells.

Currently Sergey works as a Mystery Shopper, from time to time. He tests services provided by banks, restaurants and shops. “Desperate to find a job in Armavir, I uploaded my profile for a Mystery Shopper through “Yandex. Services”, and it worked! I have an interesting, but not very stable job. Sometimes I do phone calls all day long, and sometimes I wait for a new job for months. You cannot consider the money I get a normal salary, as you cannot live for it, but this is still some income”, - Sergey says.

It was April 24th 2021 when Sergey loaded his baby stroller with a tent, a sleeping bag and some minimum food supply and left Armavir, his hometown, to go East on foot. He calls his trip “a walk that took longer than expected”. And it actually took half a year and 5281 kilometers.

“My walking tour is my own desire to atone for my past failures and, perhaps, find my new path for development. Or the essence of life, who knows. There is another goal as well: by such a difficult journey I want to draw attention to the challenges that people with disabilities face, and there are quite a lot of such challenges, trust me”, - Sergey Alexeev explains.

It was his long-cherished dream to visit Baikal, that is why the route destination was clear from the very beginning. He never worried about his physical training, as since his early childhood he loved long walks and had already walked the forests of his homeland from end to end.

As Sergey walked, he covered around 25 kilometers per day, and sometimes he managed to do 40 kilometers. 58 kilometers was the absolute maximum he covered in a day, and it was in Samarskaya Oblast. The roads there seemed perfect for him, and according to him, a lot depends on the road quality.

“Many times I missed the right turn, or got lost at the crossroads, so I had to go back all the time or even start the distance from the very beginning. Nevertheless, I met a lot of good people who supported me, helped me with food and clothes, showed the road to me, so eventually I managed to get to Kansk in half a year”, - the traveler tells.

However, Sergey knew in advance that this journey would be a challenge, which only few people could overcome. “I didn’t aim to make anything big out of it. I just took this decision, packed my things and set on a journey. Well, before that I did read a bit about the records and the ways to register them properly, as I wanted something from my trip to stay in history - in case I achieve anything”, - Sergey shares.

The traveler monitored his route with a geo-tracker. He also took photos and uploaded them to social medias. Currently he is waiting for the answer from Interrecord – an international record registration agency.

“I decided to create a category for my record named “The shortest time to overcome the distance of 1000 kilometers and more across Russia on foot by a Group 1 visually disabled person without an escort”. As far as I know, there are no such records yet, so this is something like setting the first bar for me. I don’t even think about Guinness World Records because each record registration is very expensive. For example, if you want to register your great result in kettle bell lifting in Guinness World Records, you will have to pay around half a million rubles. I didn’t even check my category there – I don’t have that amount of money anyway”, - Sergey explains. 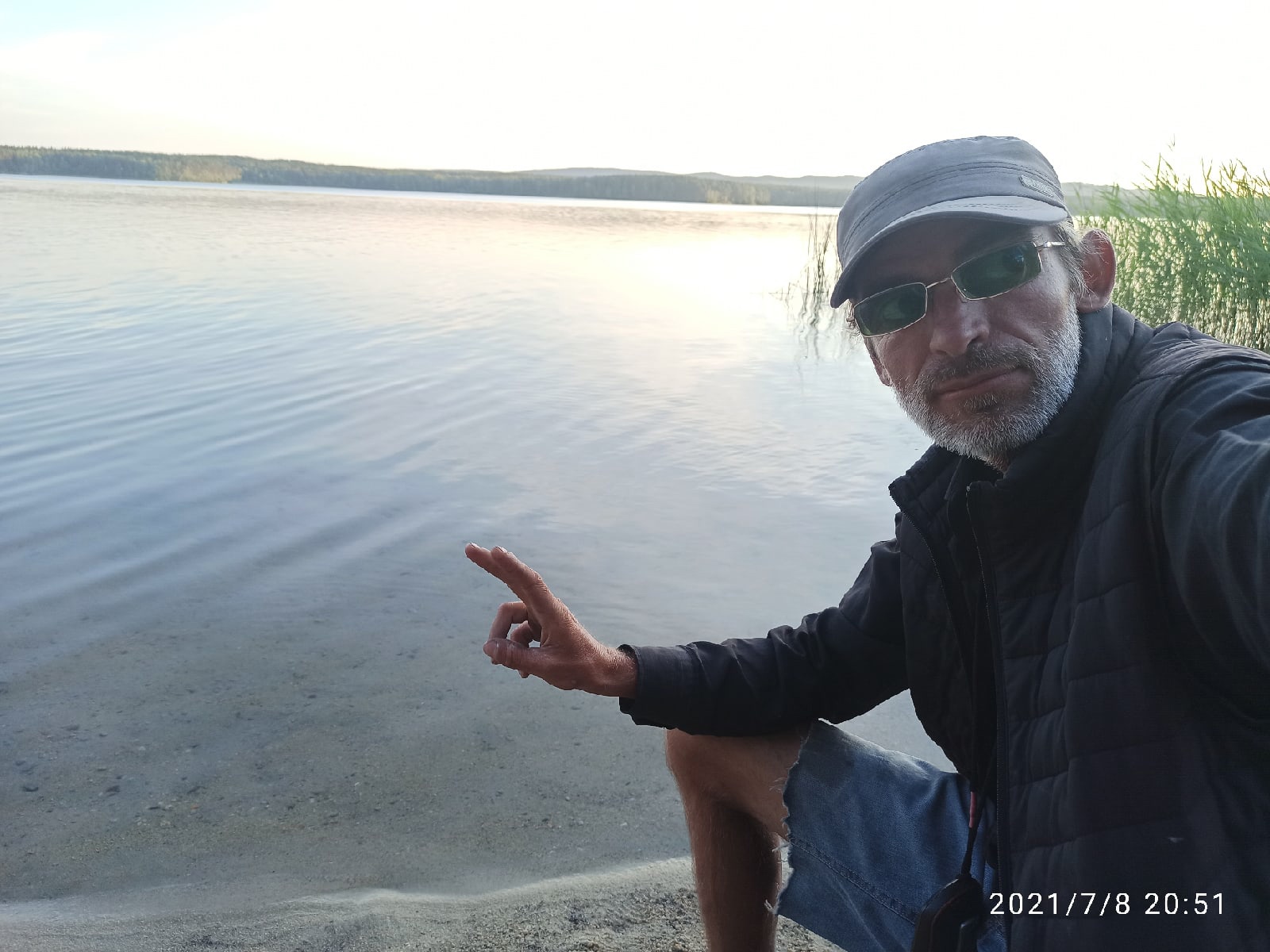 Audio description: photo in color. Summer evening. Sergey is sitting on a lake shore, wearing grey cap, black shirt and black vest, jeans shorts with torn edges. The sunset reflects in the water. There is a forest line seen on the far shore.

This time Sergey Alexeev didn’t manage to reach Baikal by foot. In October it became too cold in Siberia, and it started snowing – all that made it hard to move forward.

“The snow makes me blind, and I cannot really navigate. At the same time, a road is a high-risk zone. When it started snowing, I tried to continue my way, but found myself in a pit a couple of times, and then nearly broke my trolley. That moment I realized I have to stop. I didn’t worry about myself, no, rather about those people who might hit me with a car, by my folly. Why on Earth should they have such problems? I walked more than 5000 kilometers for a different purpose”, - Sergey says.

He anyway achieved the results needed. According to him, on some extensive parts of his way he managed to go as fast as 12 kilometers per hour, and thus to fulfil the conditions of setting a record. Sergey also succeeded in attracting public attention: in almost every city he was welcomed by journalists and sometimes – even local officials.

“This journey helped me to critically renew myself and my goals. I saw half of the country, made sure there were a lot of good people around, no matter where they worked – be it a plant or a ministry. I met certain difficulties as well: in Ufa I first broke my tent and then fell and injured my fingers and forehead quite heavily. In one of the small towns someone robbed me in a shop and smashed my face. The attackers are not yet found, and no one gave back my belongings, but I don’t regret about my trip, and I am very happy with the result”, - the traveler tells.

During his foot trip Sergey wore out 5 pairs of shoes, broke his trolley twice, but reached his destination point. He finished his walking tour in Kansk and then took few trains to go to Baikal. As he says, his dream came true, and he will never forget the beauty, the energy and the atmosphere of Lake Baikal.

“Now I am going to St. Petersburg by train, I have a shoot scheduled there. In the nearest future I will think about new trips, this time together with a wheelchair companion, perhaps. I had this idea during Baikal tour, and then in Kansk I met a traveler who used only his manual force to move in a wheelchair. I asked him how he was able to climb the hills close to Krasnoyarks, and he laughed saying that came with experience. I will consider organizing a joint trip, for a blind and a wheelchair person, to develop this story”, - Sergey Alexeev shares.