Walking Around Tsaritsyno Memorial Estate: How to Create Accessible Routes for Sightless Visitors

Audio description: a coloured photo. Early morning in a park. Sun beams are pouring through the green treetops, dappling the grass and wooden benches with wrought-iron sides.

What can be easier than a leisurely walk around a nearby park? However, it is not easy for sightless persons to find their way in parks: for example, the paths may have no paving or may wind and cross one another. Despite the active development of inclusiveness, until recently this situation didn’t change much.

Last year in Moscow, a group of enthusiasts decided to make the city’s parks accessible for people with visual impairments. They chose Tsaritsyno memorial estate as the first park to become inclusive.

Walking around the Park project’s activists told the Special View portal about how difficult it was to establish a route around one of the most prominent Moscow parks.

Pavel Dryomin was born in Yegoryevsk near Moscow. At the moment, he is 37 and he was born sightless. Having graduated from a residential school for sightless and visually impaired children, he first studied to become a masseur at Kislovodsk medical college, and then entered Special Psychology faculty at Russian State Social University.

Using his white cane, Pavel became efficient at moving around Moscow and Moscow Region, and even beyond. However, for quite a while walking around parks was virtually impossible for him, until he, together with several enthusiasts, came up with the idea of creating accessible walking routes for the sightless. 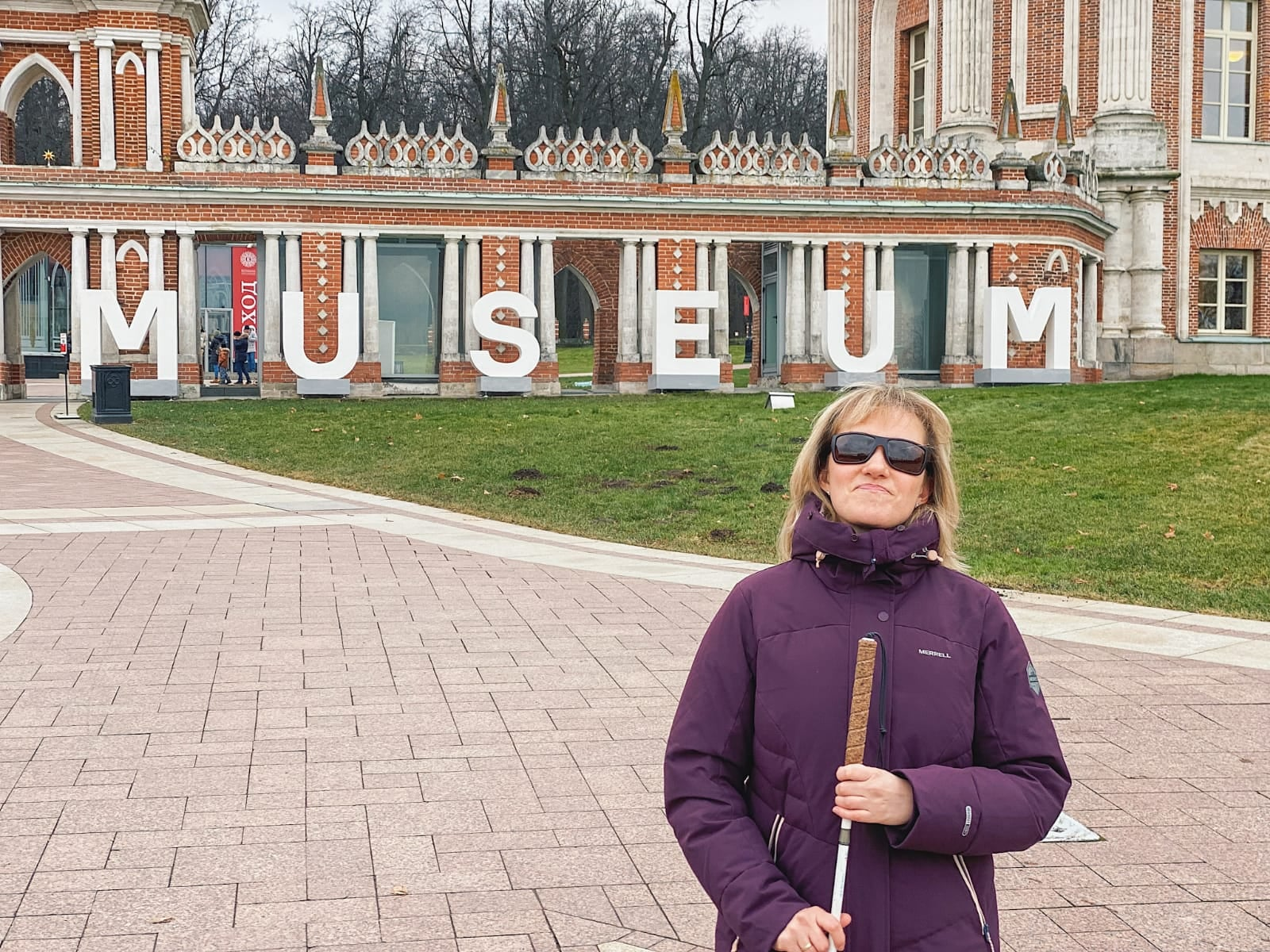 Audio description: a coloured photo. A fair-haired young woman in black glasses and a purple jacket is standing in front of Tsaritsyno park palace. She is holding a white cane in front of her. Behind the woman there is a sidewalk paved with white stone. It leads to the palace. The palace is an ensemble of buildings made of brick and with white stone décor and high Gothic apertures. In front of the museum entrance, white 3D letters are forming the word MUSEUM.

“Our Walking around the Park project became possible thanks to Act with No Barriers program launched by the Moscow city branch of the All Russia Association of the Blind. While studying social project planning and working with the program’s trackers, we got the chance to make up a united team, and turn an interesting idea into a working project. Our project was selected for further development, and it obtained financial support, so in the autumn of 2021 we got down to work”, — tells Pavel.

Pavel Leonov (the project’s PR manager), Ruslan Ayginin (IT expert), Alexandr Novikov (project promoter and guideline developer) and Anna Popko (project leader and the team’s inspirator) were the initiators of this project. While Pavel Dryomin, who had certain business experience, got in charge of the financial part and controlling expenditures.

“The essential idea of the project is creating safe and accessible routes for sightless persons to walk around Moscow parks without assistance. For this purpose, we developed a whole range of activities: we created navigation tracks for mobile apps and wrote a detailed description of the parks’ landscape, developed professional audio guides and organized training sessions for museum workers to improve their communication with totally or nearly sightless visitors. As pilot platform for our project we chose Tsaritsyno museum estate, because it is one of the most beautiful Moscow parks. Moreover, our expert Alexandr Novikov works there, which makes it easier to communicate with the park’s administration directly”, Pavel Dryomin explains.

These walking routes comprise GPS track points. Sightless persons may follow these points to visit most popular places for the guests of the park. At the moment, the team has developed three routes 1 to 3 km in length.

“The routes include parkways and various places of interest, such as the Grand and the Small Palaces, the Bread House, the Ornate Bridge and so on. Also, track points will mark the entrance to the park, restrooms, crossings of the main paths, and dangerous zones that are not recommended for visitors. There also will be track points for those who just wish to walk around, enjoy nature and have some space. For convenience, the routes are circular and do not overlap”, says Anna Popko, the leader of Walking around the Park project. 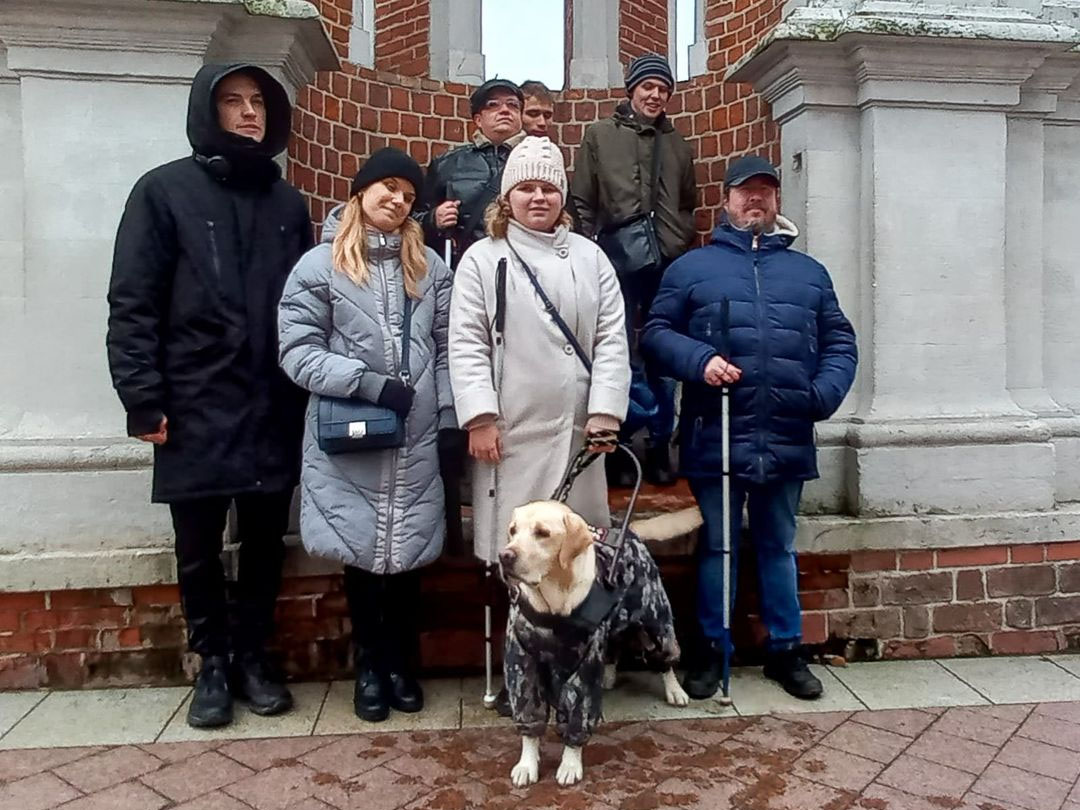 Audio description: a coloured photo. People in warm jackets are standing beside a semicircular niche in a brick wall. The group includes five men and three women, three persons are holding white canes. A young woman in front is holding her guide dog on a harness, a pale-yellow Labrador retriever in protective overalls.

For now, the routes are still undergoing testing; our project’s focus group has walked along 2 out of 3 already. While testing, they managed to find several errors which we now need to correct. We decided to include a special guided tour into one of the routes. The tour was created by Tsaritsyno museum workers.

“We want to make walking in the park not just pleasant but informative. Walking along the designed routes, one can touch the old brickwork of the palace, take time to examine tactile models placed outside (by the way, they are made with great skill), and study the Ornate Bridge. In the future, using an audio guide, people will be able to learn about the history of the park, its buildings and its architectural image”, says Anna Popko.

While analyzing the potential software for the project, the team was planning to use a navigation app called OsmAnd. This was the program for which Ruslan and Alexandr designed the first routes. However, actual walking and testing showed that its functions were insufficient.

“One more drawback was that this app was not working properly on iOS platform, which meant cutting off half of our intended audience. We understood that simply creating navigation routes was not enough. We needed to make quality written description and an audio guide, so that a sightless person could imagine the beauty of the park and feel more at ease while walking unaided”, explained Ruslan Ayginin, the IT expert.

As a result, the team decided not to stop at OsmAnd app alone, but to create sets of track points which could be used to map a route using any other navigation app.

Although park administration actively supported the idea, the team faced major difficulties from the start. They were associated with the special status of the park.

“When we chose Tsaritsyno, we believed it would be easy for us. Alex works there as guideline developer, and he is a member of our team. But we failed to take into consideration the fact that this is a museum estate and therefore, specially protected area. This is why, from the very beginning we couldn’t just put tactile and reference marks for sightless people, couldn’t raise the ground level of the paths or hang signs where we wanted. At each step one needs to get approvals, which is extremely time-consuming. But this can’t be helped. One can even regard it as a good thing. Because all this gives us more experience, and all the lengthy approvals mean that any changes in the landscape of the park will be introduced extremely rarely. This will help to create routes with maximum stability of the track points, and it will not change for many years. Which is very convenient for the sightless”, says Pavel. 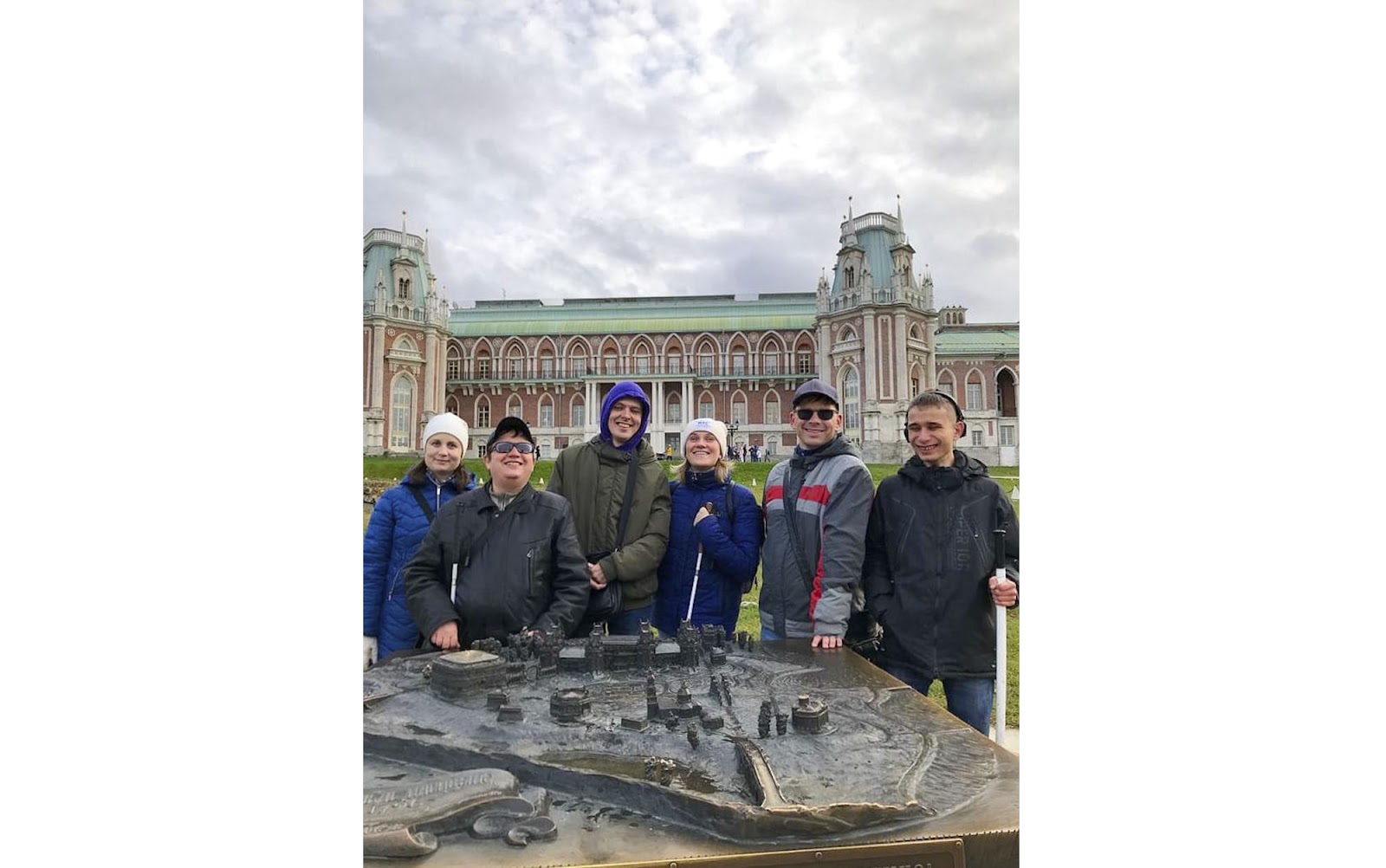 Audio description: a coloured photo. Tsaritsyno museum estate. Four men and two women in warm clothes are standing in front of the tactile model of the complex. Three of them are using white canes. All are smiling. Behind them, there is a red brick palace with ornate white decor and towers with Gothic lancet windows.

At the early stages of the Walking around the Park project, the team, together with museum estate staff, found most difficult portions of the routes they designed, and defined the problems they could solve without tedious approvals.

“For example, we learned that dogs are not allowed to the museum park territory. However, at the meeting with the park administration we were able to agree upon the right of entrance for sightless persons with guide dogs, provided that such persons must carry a plastic bag to tidy up after their dogs. We had to explain that for a sightless person, a dog is as much a technical means for rehabilitation as a white cane. Also, we planned a training session for Tsaritsyno staff, to give them skills to communicate with visually challenged visitors”, Pavel Dryomin says.

The active part of the project will be completed in March, but the team is willing to go further with the project. They are planning to design new routes, prepare a manual guide to share their knowledge, and create a website for the project. And what is more, there are many parks in Moscow, so there is plenty of work ahead.