Being a farmer: how a sightless entrepreneur established his own dairy farming business

Audio description: photo in color. It’s early autumn, sunny day. The Smolyaninov family is sitting on a high haystack: Alexander himself, his wife Irina and their 6 children – 2 girls and 4 boys. The kids are playing, Alexander and Irina are sitting back-to-back and smiling gently. Both adults are dark-haired, medium build, with oval faces with regular features. Alexander has a short beard, his eyes are closed.

Alexander Smolyaninov is the Head of the Farmers’ Association of Ramensky district in Moscow region. He runs a big farm, promotes legislative initiatives, raises children and helps other farmers. And he does this without sight. “Special View” recorded his story.

From a museum worker — to a farmer

The story of Alexander Smolyaninov from near Moscow Zhukovsky began in a way very familiar to many visually impaired people. Deterioration of vision, boarding school in Moscow region, masseur courses, then higher education in phycology, love for radio and audiobooks. He tried different jobs and realized, that although most of them were quite accessible for a person with visual disabilities, they didn’t interest him that much.

Alexander’s desire was to help other visually impaired people, and he established and registered a public institution. As a result, he was the one who made it possible to open the library for the blind in Zhukovsky, who launched social projects and arranged sightseeing tours to nearby cities.

Later, Alexander and his associates created a professional union, based on Zhukovsky Chamber of Skilled Trades, and soon he headed it. He invited masters from different cities — architects, potters, beekeepers, herbalists.

The ancient Russian culture attracted a lot of interest, and all those unique specialists that he managed to find helped him to record some precious video courses on beekeeping, woodworking and carpentry. It was in 2006, the videos were issued on CDs and you could learn on your own, how to build an old Russian cottage — “izba” or household buildings. 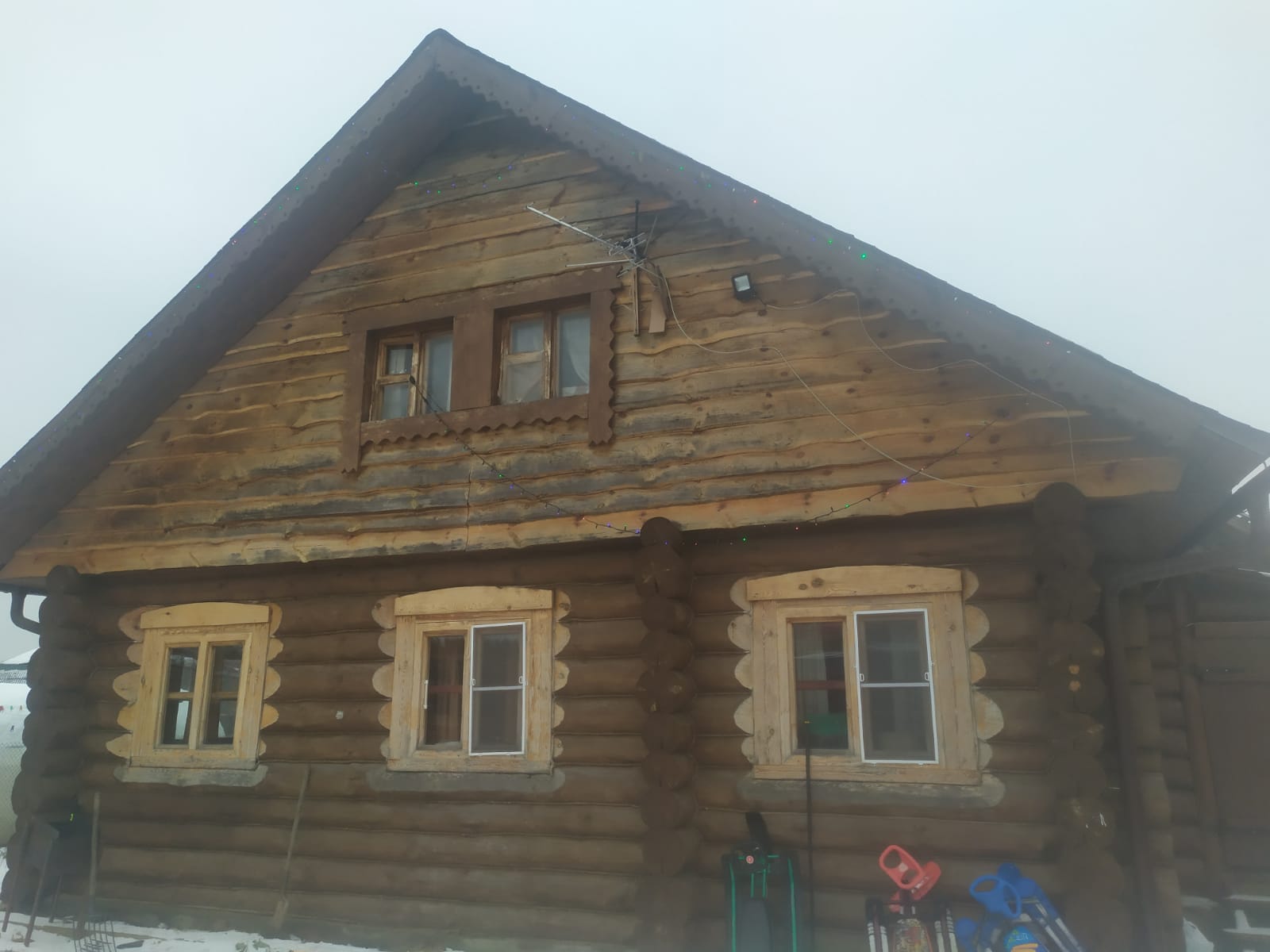 Audio description: photo in color. A close-up of a two-story Russian cottage (izba) with three windows and a gable roof.

Alexander expressed a keen interest towards items of peasant life. Soon he collected so many of them, that he decided to open a museum.

“I always liked to give tours and tell about Rus handicrafts and culture to interested people. And Rus always comes along with milk, sour cream, bread — simple village food. In the meantime, I studied the topic of healthy food, got used to it myself and gladly explained it to others. After my wife and I came back from one of our tours to Archangelsk region, where we managed to live out in nature and to stay in a real, roughly made izba, we suddenly realized that we didn’t want to go back to our stuffy apartment. We wanted to go wild and free. So said — so done. We sold our flat and invested the money into building a good izba by all the canons of XVIII century: massive doorjambs, big windows, dining table with benches, kitchen, red corner with an icon, and Russian stove, for sure. The izba turned out to be so good — two-story, spacious. Soon, we moved in”, Alexander tells.

Once they moved in, Alexander bought goats and cows. Milk yields grew, and the family learnt to make sour cream, butter, cottage cheese and yogurts. As time passed, they got surpluses and started offering them to their neighbors.

“Recently, the culture of healthy eating has been rapidly developing in our country. However, there is a perception that everything coming from a farm will be good, organic and healthy. That’s wrong. A lot of farmers do not differ anyhow from agricultural holdings: they feed their animals with same compound feedstuff with chemical premixes and artificial vitamins and give them lots of antibiotics. And then we eat all this. That is why our primary step towards building our own big farm was providing our animals with the proper healthy food, which would not contain any harmful additives”, Alexander tells.

The neighbors liked a lot Smolyaninovs’ dairy and began to recommend buying products of their peasant farm community to their friends. Alexander and Irina, his wife, named it “Big family”, as they have 6 children.

“We felt — that was our thing! We and our children get so much energy and positive emotions when we see new calves, colts and baby goats born. Our herds grew constantly. One day we learnt that a state farm close to our house had gone bankrupt and its land was sold at auction. We understood — we needed to expand, now or never, there might not be a better chance in the future. That time we didn’t have enough money to buy those 3 hectares, but my investigations led me to Moscow region administration. The governor helped me to collect papers to apply for the grant, and we won it. That was how we got the first 3 million from the government and expanded greatly our agricultural capacities”, the blind farmer shares. 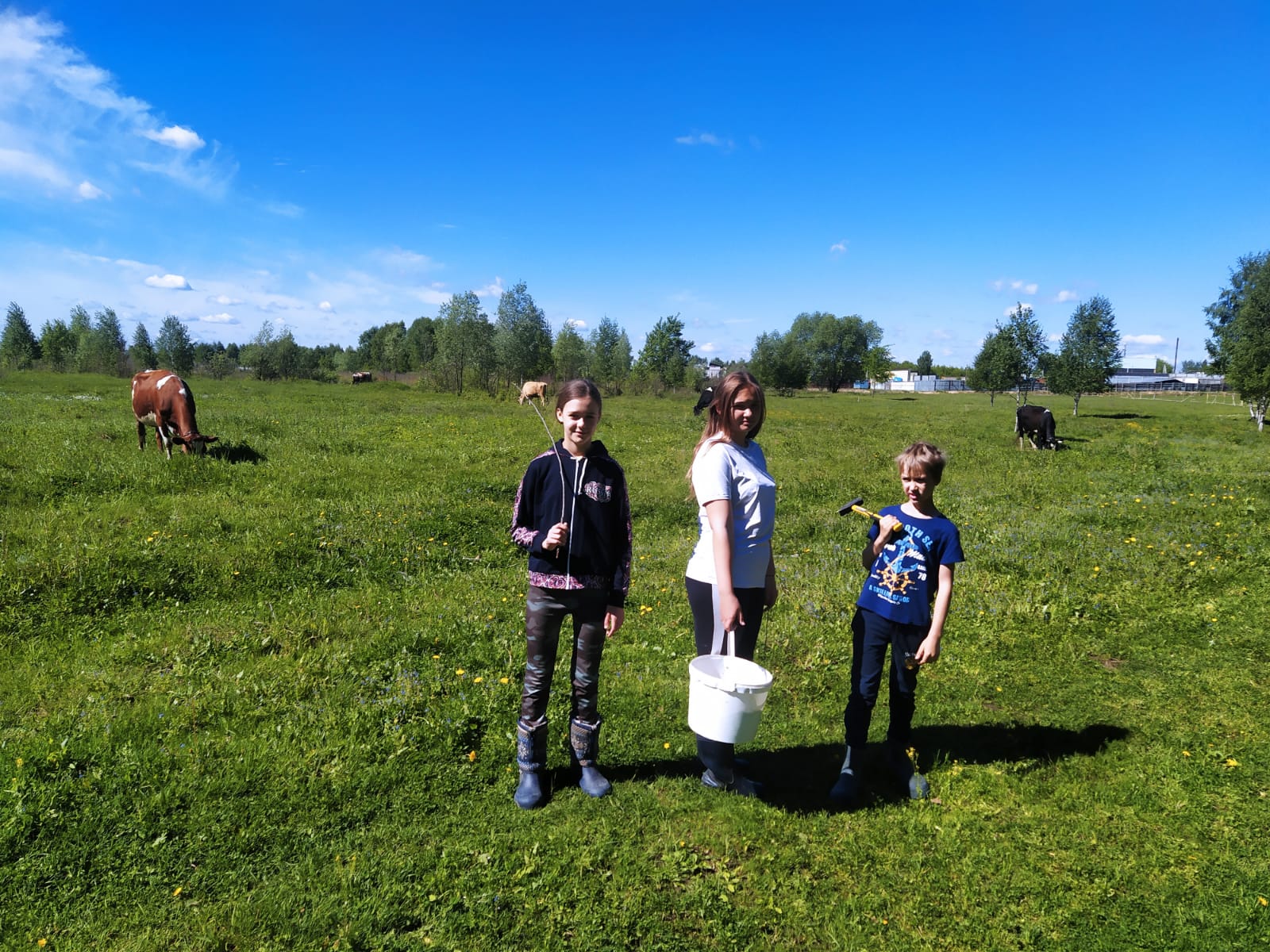 Audio description: photo in color. Sunny summer day. There is a girl of around 11 years old, a young blond woman with a white plastic bucket and a boy of around 8 years with a hammer in his hand, standing together in the pasture. All wear t-shirts, trousers and rubber boots. 4 cows are grazing behind them.

Alexander didn’t stop there. He headed a non-governmental organization of the local farmers and proposed to create a special program to support large families holding farms. The farmer’s initiatives were heard.

“I guess, what we are most proud of today is the opportunity given to a multi-child family to purchase agricultural machinery and other most needed equipment with the 50% state subsidy. Let’s say, we bought a truck for 2 million rubles, and Moscow region gave us 1 million back. We and other large families couldn’t be happier about this important and vital support from the government”, Alexander tells.

However, it’s not that simple — the household has to pay off. According to Alexander, there is only one way to get to profitable business — through hard work, continuous investments and expansions, while small farms not striving for development are doomed to soon disappear from the market.

“As a member of the Farmers’ Association of Moscow region, I constantly encourage everybody to learn to produce new goods, purchase machinery, seek to expand. However, many farmers become loners, lock themselves in their households and don’t accept advice and help, although there are lots of possibilities today: grants, subsidies, ever-growing trend for good farm products”, Alexander adds.

Today’s farmers do face a lot of issues. One of the most important is veterinary control becoming stricter and stricter. Alexander claims, that, on one hand, the government provides help and subsidies, on the other — sets same rules for small farms and factories.

“It looks like they do it for good — to increase the product quality and strengthen the animal control. Yet, the problem is that all the spends on implementing these innovative decisions fall upon the farmers’ shoulders. If a big agricultural holding sees no issue in spending thousand rubles on veterinary services, a small farm owning cows may shortly go bankrupt because of that”, Alexander assures.

He also warns those people with disabilities who shall decide to become a farmer: the moment you officially register your farm as a business entity, you lose all additional social welfare benefits. 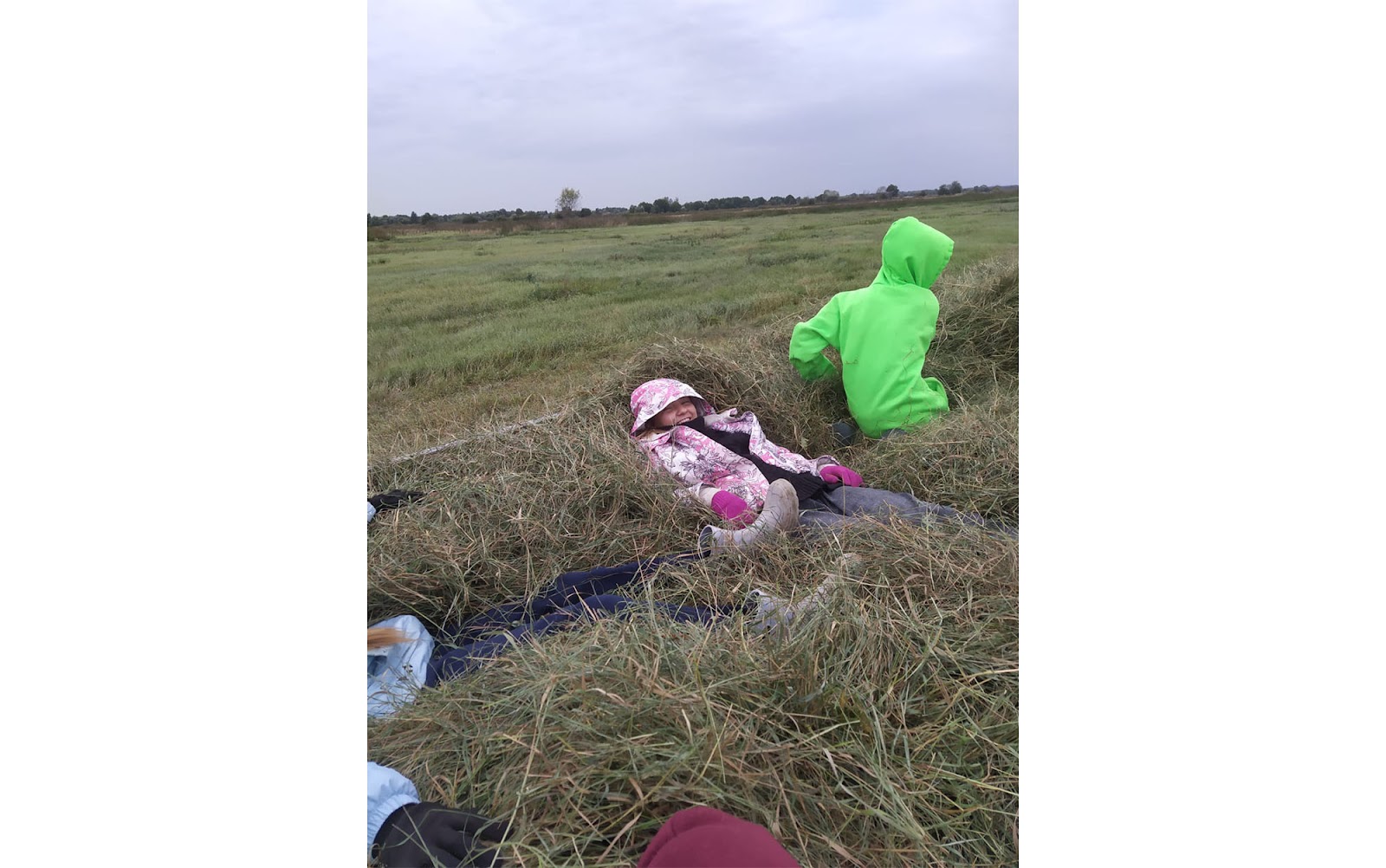 Audio description: photo in color. Gloomy autumn day. 3 children in bright windbreakers and rubber boots are lying in the hay and smiling. There is a wide green field behind, with the forest line in the distance.

A day in the farm

The day in the farm begins early — at 5 o’clock in the morning. At sunrise, every family member gets down to their own work — be it animals feeding, hay changing, milk gathering, preparing of dairy products, getting them to the stores. Same happens in the evening.

“From the very begging we got used to involving our children into farming. We did it through games, competitions and contests. As a result, every kid contributes into one big common cause. One will get up at 5 o-clock in the morning and feed cows, another will take care about goats, someone will help in the kitchen, and the oldest one has recently declared he will make bread. We may have our own bakery soon. We make bread for ourselves, for quite long, but have not yet done it for sale”, Alexander shares.

The head of the family actively participates in the chores, if needed. He may mow grass, feed animals or carry buckets. The rest of the time is spent on looking for the clients, negotiations, purchasing of machinery or materials, leading construction on new land.

Alexander claims, that there is still not enough manpower for everything, so the family hires workers. They also have Tatiana and Maria, her daughter, helping around with the farm. They are refugees from Ukraine, who arrived in Russia 8 years ago.

“Tatiana and her daughter Masha were under the bombs in Kramatorsk. Tatiana grabbed her daughter and immediately fled to the East, to Russia. We helped the refugees long before, but Tatiana and Maria somehow became part of our family, at once, and started assisting with the chores”, Alexander Smolyaninov tells.

Shared victories and challenges on the way to the big farm united everyone, and today they are one big happy family. Tatiana became Alexander’s business partner and acquired various jobs: a cheesemaker, a tractor driver, a vet.

“Tatiana is the unlimited source of energy and positive attitude for us, she finds new ideas and proposes new ways to expand our business. For example, we have a squirrel living with us now, and we indeed consider opening a small zoo here, one day in the future, so visitors could interact with the animals, feed them, learn more about farming and peasant life”, Alexander tells.

Every evening the family gathers around the table and keeps their own council. Everyone has the right to speak, propose something or tell about good and bad things that they have come through during the day.

“We try to make it playful for the kids, not boring. They participate in the councils on an equal basis and have same right to suggest something new. Little by little I teach them farming skills, as well as organizational ones. At the same time, they get engaged into other activities: one practices wrestling, another — dancing, another — basketball. Since early childhood every one of them has his or her own passions and responsibilities, this helps to learn self-discipline. Even if someone doesn’t follow our way, he or she will have useful, indispensable skills”, Alexander tells.

The family dreams big — they have another 50 hectares of the leased land to cultivate and plan to finish the construction of a new barn. This summer Alexander plans to set the stage for guided tours and rural tourism.

“The demand for such services grows day by day, and a lot of people wish to enjoy the unspoiled nature and experience the culture of the ancestors. Besides, we are located right on the way to Kolomna, so it will be easy to combine sightseeing tours around the city with a trip to our farm. And we do have much to show and to tell”, Alexander shares.

In the future he wants to open a museum of peasant life, based on the farm, with the tactile exhibition being as much accessible as possible for people with visual impairments.

“As the one having visual impairments, I know for sure that most of the farm operations can be done by a blind person. It will be an interesting experience for me to give people the opportunity to explore the production process by touch and to learn more about how our ancestors lived in the villages centuries ago”, the farmer says.