“I realized my dream could still come true”. A blind mechanic tells, how he builds engines by touch

Audio description: photo collage. A black-and-white photo in a round frame on violet background. A man, wearing black leather jacket, is sitting on a chromed motorbike with high mirrors and big round headlamp. He keeps his hands on the wheel, smiling mildly. His eyes are covered with black, wire-rimmed aviator sunglasses.

Konstantin Kurmaev lost his sight in an accident, but it didn’t affect his passion to mechanics in any way. Today he assembles engines by touch, works on a lathe, operates welding machine and repairs motorcycles. 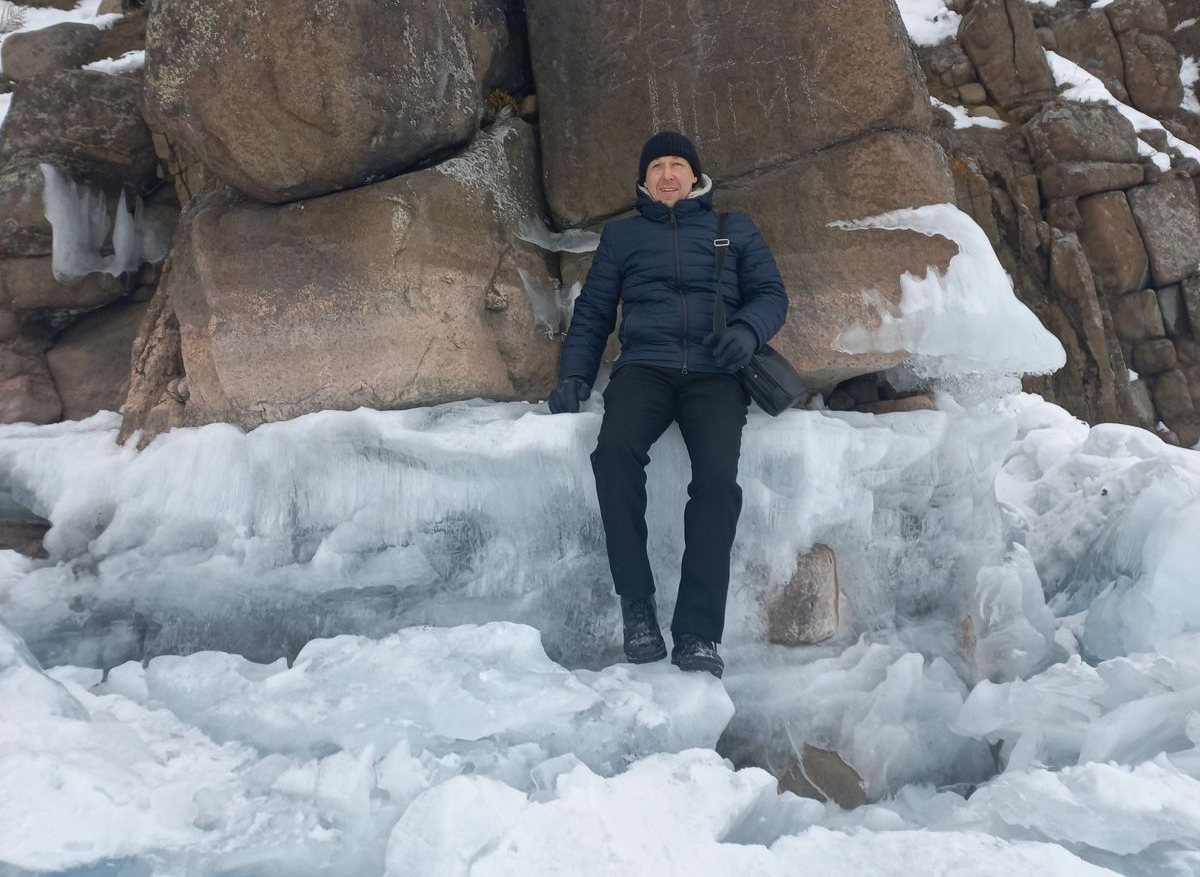 Audio description: photo in color. Winter. Konstantin Kurmaev stands at the foot of a mountain, covered with ice. He is smiling. He wears short blue down jacket, dark trousers and winter boots. He has knitted hat and warm gloves. With his left hand he holds a black bag, hanging on his shoulder.

“Come, when you grow up”

In his childhood Kostya Kurmaev from Bratsk showed a particular devotion to technology. While all the kids were playing with toy boats in the nearest puddle, he disassembled old appliances, examined electronic boards and experimented with batteries. In his 5 he dreamed about building rockets and engines, but he was too young to get into the club for aircraft modelling and rocket engineering.

“Whatever I tried to do that time, I always heard adults saying — ‘come, when you grow up’. But my curiosity couldn’t wait for several years, that’s why I often studied on my own and took my very first steps in mechanics”, Konstantin Kurmaev shares.

At the age of 7 he finally managed to get into a club, but it was a club for wood carving. Konstantin stood at the machine, and it was hard because of his small stature and lack of experience, but he soon got much interested in this area. Later he found himself in the desired club for aeromodelling and spent an entire year creating and building models in order to launch them on April 12th, on Cosmonautics Day.

“USSR gave a lot of attention to modelling science for kids. You could find any clubs, literally any, in any imaginable area! You could even take an engine for a rocket from the factory in Bratsks, the engines were produced specifically for such clubs for young technicians. We did test launches, calculated paths, fixed our own mistakes and again tried to ‘conquer the space’. No matter if we were only 15 years old”, Konstantin says.

In 1990s it all collapsed, but Konstantin continued his development in mechanics and modelling. From the Soviet books he had he studied new engines and later got fascinated by chemical experiments.

“By that time, I had entered a technical school, but its educational program was of little interest for me, except for a couple of subjects. At the same time, we cooperated with a friend and tried to assemble and disassemble engines in garage. That time I bought and perfected my first moped, then bought a motorcycle and set up my own chemical lab at home. There was very little information available, and I went to the internet café to learn the details needed for the next experiment in that one paid hour. Internet was not too stable, the information was scarce or even inaccurate. This played a bad joke with me. During one of my laboratory experiments I heated the substance to 120 degrees — and it exploded. The sheds of the lab flask went into my eyes, and I lost sight, while the explosion injured my left hand and still today the fingers of my left hand aren’t working well”, Konstantin explains.

Before the explosion Konstantin was about to finish technical school, made savings from scholarship and dreamt about buying his own garage. That accident changed his whole life forever: friends turned their backs on him, and his girlfriend broke up with him. Konstantin recalls, he was left alone with his pain and despair.

“That time only my Mom supported me. She divorced with my father long ago, and she alone raised me and my sister on a small salary. Then my sister grew up and left home, so I had to become the breadwinner of the family and help Mom, but instead became a burden. I had different thoughts in my head, sometimes even the darkest ones, but thanks to my Mom’s support and my unbeatable curiosity I started to pull myself out of that abyss of despair”, Konstantin shares.

He was keen to learn what he could do with an engine by touch. Would the hands remember what he saw before with his eyes? Would he be able to again repair motorcycles if he didn’t see the details?

He couldn’t dare to touch the engine, instead decided to start with wood works. While staying in the hospital in Ufa, he found an oak tree, cut a good branch from it, carried it home and carved a smoking pipe for himself. Then he began to assemble furniture from the materials he had at home. 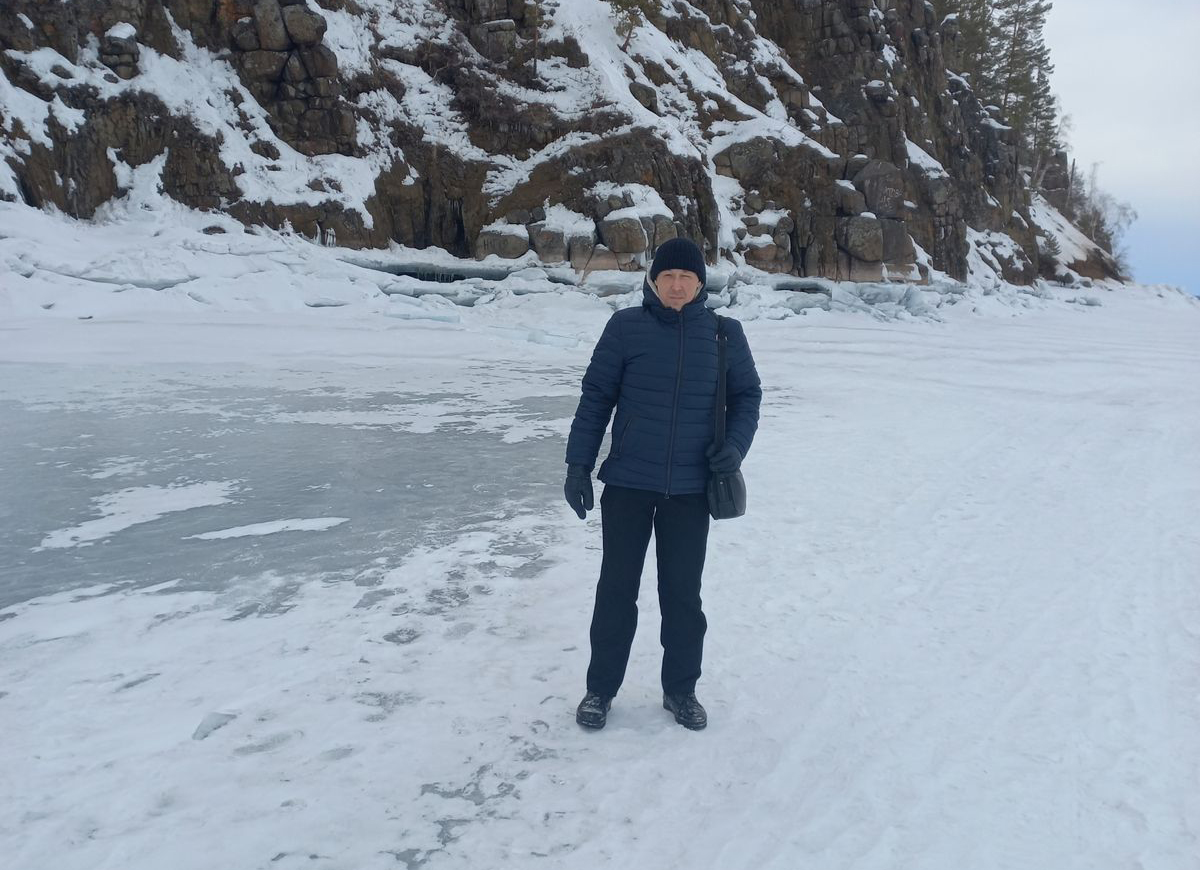 Audio description: photo in color. Winter landscape. Konstantin Kurmaev stands on the frozen surface of a pond, with mountains seen in the background. The snow covers the ground, mountain ledges and few trees on the slopes.

“I was surprised to see that I was doing good. I plucked up some courage and borrowed a broken moped engine from my friends. It took a lot of time for me, but I will never forget that excitement, when I managed to run it right on the balcony of my flat. I was so happy! Unlike my neighbors”, the blind mechanic laughs.

It seemed that the man managed to learn and remember well the structure of various Soviet engines. Once a new engine appeared in his hands, he asked neighbors or friends, who worked in garage, to describe the inside of it.

“When I began to assemble engines by touch, I realized that my dream to buy a garage and turn it into a workshop is quite achievable. I made savings from the pension, then bought an old garage and started rebuilding it”, Konstantin tells.

He struggled to do everything by himself — for a blind man it took a lot of time and efforts. It took him 3 years to dig the garage basement and another 2 — to lay concrete floor there. Then the process went a bit faster: he insulated the walls of the garage, bought tools and machines.

“The garage renovation made me learn blind welding and mixing concrete in a concrete mixer. Filling the floor and wall covering seemed like a lot easier tasks for me. My hands suffered constantly — either I stuck my fingers somewhere or hit them with a hammer or a hacksaw. But that didn’t really matter, since I was doing what I loved, and was happy”, the mechanic explains.

Konstantin began making friends with people with no visual impairments and with like-minded craftsmen, technicians, mechanics and turners.

“At first, I was told not to show off too much, because I couldn’t see, but as time passed, they admitted that in certain spheres I had more experience and knowledge. That’s true, I can help with advice and deed. As a result, first my friends and later — total strangers began to bring me to repair various appliances and machines, be it a cultivator, or a saw, a power station, a moped or a motorcycle”, the blind mechanic tells.

Initially, Kostya helped others for free, but the competitors from the nearest garages argued, that he was stealing their customers. His friends also suggested him to start earning money on his hobby, helped him to build the pricelist and spread around the information about the unique mechanic, who was ready to take on practically any repair job.

“I started getting money, my own money. I saved the biggest part of it to buy new equipment and machines in a while. A couple of years ago I bought my second garage. I plan to expand my workshop there, make a warm floor and buy a few more machines for wood and metal works”, Konstantin shares.

A lot of things take time for Konstantin to execute. Sometimes, not less than a year. However, as his students mention (and yes, Konstantin has already got his own students), his curiosity, passion for the result and unlimited patience is what distinguishes him from others. With these qualities, while on rehabilitation in Biysk, Konstantin learnt to move around the city independently with a cane and acquired computer skills.

“Today all is not the same as in 90’s. You can take any engine, type its name on computer and watch a Youtube video on how it is built. In case I don’t understand something, I can always address my friends, they will look for details and explain to me. Now I have a job that can bring me money and satisfaction. I only need to find my soulmate, to add the meaning into what I do”, Konstantin Kurmaev says.

Lately he has got a lot of orders for the repair works, while in his free time he continues experimenting and trying new things. He assembled 2 bicycle tandems in his garage and in summer rides them together with his neighbor. Just recently he has built an all-terrain vehicle and dreams about riding it around water reservoir, on his own.