The Cryptology museum: Adapting a Science and Technology Exhibition for the Sightless

Audio description: a coloured photo. Hands of several male and female visitors are holding, touching and examining a glass retort. It is a transparent pear-shaped vessel with a long bent neck.

In December 2021 Moscow saw the opening of Russia’s first and only museum dedicated to cryptology. The new museum space was visited by several groups of sightless and visually impaired guests. They were given guided tours using tactile models and exhibits.

Nikita Bolshakov, the Cryptology museum curator for accessibility and inclusion programs, tells Special View about the adaptation of science and technology exhibitions for visually impaired guests and about most interesting pieces of the museum’s collection available for tactile examination.

The creation of the Cryptology museum was initiated by Kryptonite scientific research company which specializes in cryptology, computer-assisted learning and other promising IT spheres. The company’s cryptology experts took part in creating the display.

The house where the museum resides was built in 1885. At first, it was an orphanage for the children of poor priests, later it housed schools, orphanages and even the special Marfinskaya prison, where employed scientists and persons under custody worked on creating secret communication equipment. Taking into consideration the latter fact, it was decided to turn the building into a museum dedicated to the science of encryption.

“The adapting of the exhibition area for guests with various forms of disability began not with the opening of the museum, but from themoment of the concept development,” says Nikita Bolshakov.

It was essential for the team that worked on creating the museum to make it interesting for all types of visitors, including children, people with various forms of disabilities and people with different life experience.

According to Nikita Bolshakov, the museum creators were thinking about its accessibility both at the stage of developing the contentand directly while designing the exhibition area.

On Tactile Models for the Exhibits

The number of tactile models at the museum is impressive. “About fifty in total, but the number is constantly growing. During guided museum tours with groups of sightless and visually challenged guests we see that there should be tactile copies for some exhibits,and so later we make them. The number of materials available for tactile examination will grow consistently,” says Nikita Bolshakov.

He adds that all the tactile pieces in the museum collection may be divided into three groups:

“Our museum specializes in technology, but our collection is quite various”, Nikita Bolshakov continues, “it tells about the development of cryptology in different historic periods, that is why not all the museum displays are equally adapted. For example, the XXI century hall, which has many screens and visual installations, does not have many tactile objects simply because creating themis quite complicated”. 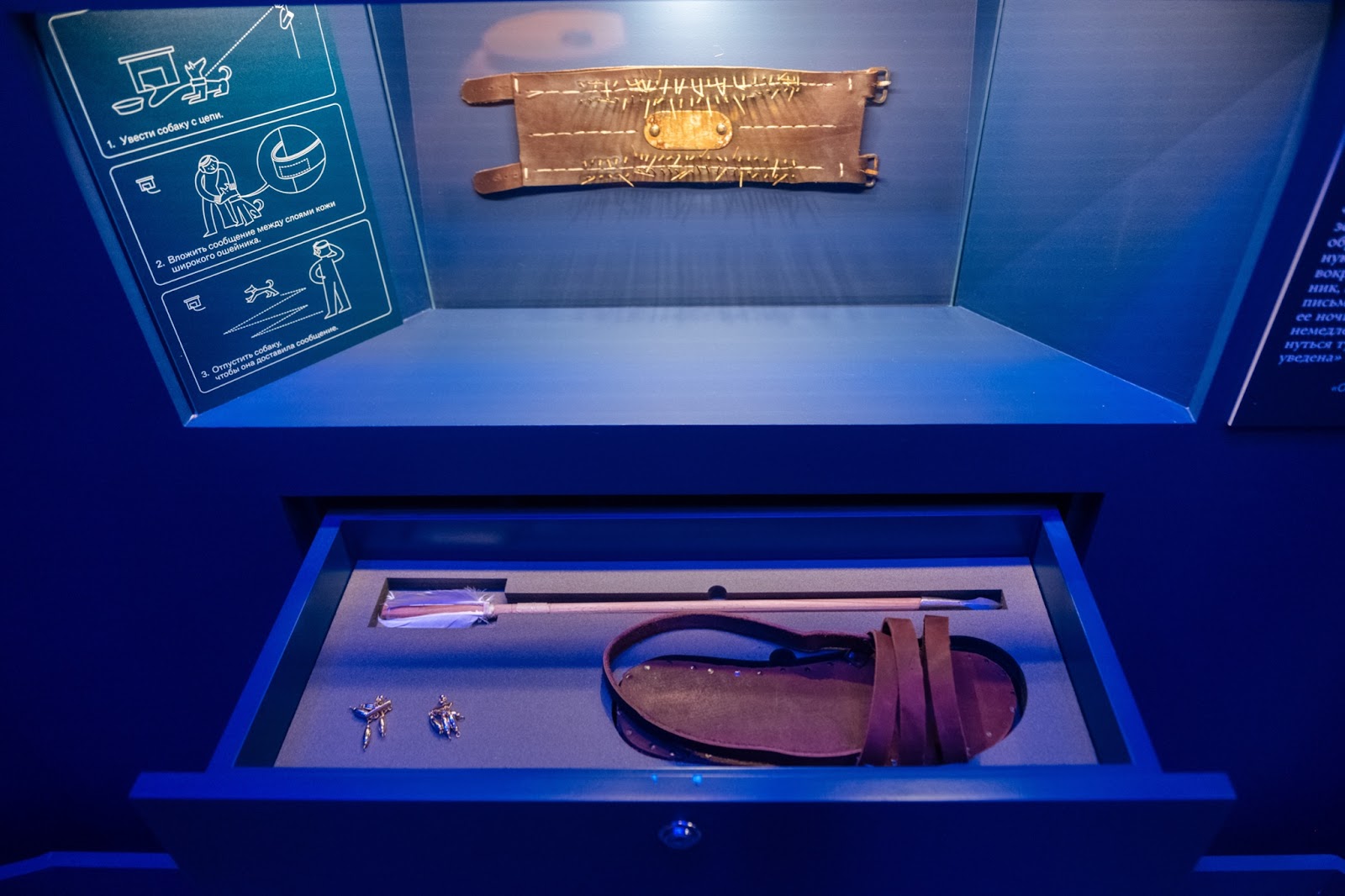 Audio description: a coloured photo. The exhibits of the Cryptology museum are displayed in a semi-dark indigo room with spot illumination. A wide leather collar with metal buckles is fixed inside a niche in a wall. Beside it, there are pictures explaining the way to deliver a message with the help of a dog. A note is put inside the collar between the layers of leather. Below the collar, in a drawer, there is an ancient leather sandal and a long wooden stylus with metal pen on one end and feather trimming on the other.

On Peculiarities of Adaptation of a Technology Museum Display Area

Nikita Bolshakov notes that adapting an art museum does not differ that much from adapting a technology museum: whether one works with paintings or artifacts having historical value, one must create copies intended for tactile examination by sightless guests.

The difference is that at a technology museum, visitors are allowed to touch many of the objects and exhibits, for instance, at the Cryptology museum, sightless patrons are given objects inside which spies used to hide their enciphered messages.

And of course, a technology museum is much more interactive than an art gallery, it involves multisensory interaction of the guests with the display area.

“At the same time, there are certain difficulties in making a science and technology display accessible. It is difficult to make adescription for some objects, for example, Jefferson’s cylinder (a ciphering device — editor’s note). One can understand the mechanics of its work only through direct interaction with it,” says Nikita Bolshakov.

On the Practicum Table

In addition to the tactile copies and objects which sightless and visually challenged visitors can freely touch, the Cryptology museum offers them the opportunity to try and encipher information on their own using one of the available simulators.

“Lying upon the Practicum table, there are four types of enciphering devices: the Polybius square, the Aeneas disk, the Caesar’s disk and the scytale. All the simulators, except the scytale, are marked in Braille, so sightless visitors may work with them unaided. To use the scytale, one needs to write on paper, but the device itself, thanks to its tactile nature, helps the sightless guests get the idea of how it was used,” Nikita Bolshakov says.

On Possibility of Unaided Visits

The creators of the museum wanted to make the display area as accessible as possible, so that a sightless patron would be able to move around it unaided. They thought about making audio guides which would be able not just to tell the visitors about the exhibits, but to describe museum rooms. However, the architecture of the display area proved to be complicated (especially in the XXI centuryhall), so for sightless persons finding their way around during their first visit might be complicated.

“One may come to the museum with a companion, or one may ask museum workers and keepers for assistance, and they will help the visitor to complete the route. In Moscow Metro Centre for Assistance to Passengers with Limited Mobility one can apply for being accompanied to the Cryptology museum, and inside the museum the guest will get help from the staff: each hall has museum keepers who can show patrons around and offer them objects available for tactile examination. However, moving around the display area without any assistance whatsoever will be complicated for visually impaired persons,” says Nikita Bolshakov. 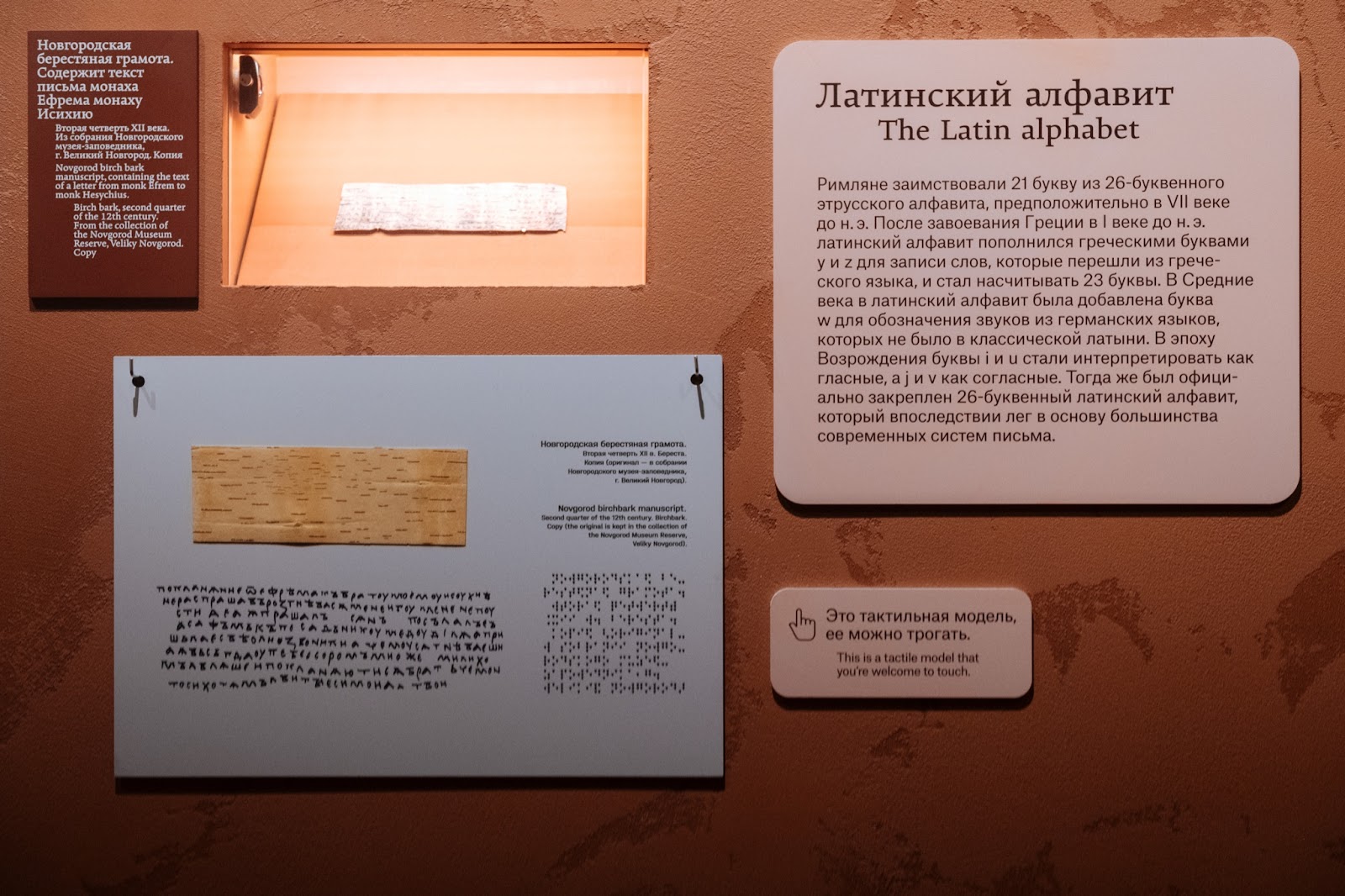 Audio description: a coloured photo. Three rectangular plaques of various sizes are fixed to a red wall. They tell about the origin of Latin alphabet and birch bark letters. The pieces of birch bark are marked with a sign: “This is a tactile model. You may touch it”. Nearby, the information about the exhibits is written in Braille.

According to Mr. Bolshakov, the target audience of the museum is persons over 12 years old. Younger schoolchildren do not come very often, but even for them the exhibition halls hold some interesting objects. The Cryptology museum was visited by sightless schoolchildren, who studied tactile models and learned about the history of cryptology with great pleasure. The Museum welcomed large groups of grown-up sightless and visually impaired persons, but in order to hold the specialized guided tour with maximum comfort, Mr. Bolshakov recommends visually challenged guests to form groups of 5 or 6 persons maximum. 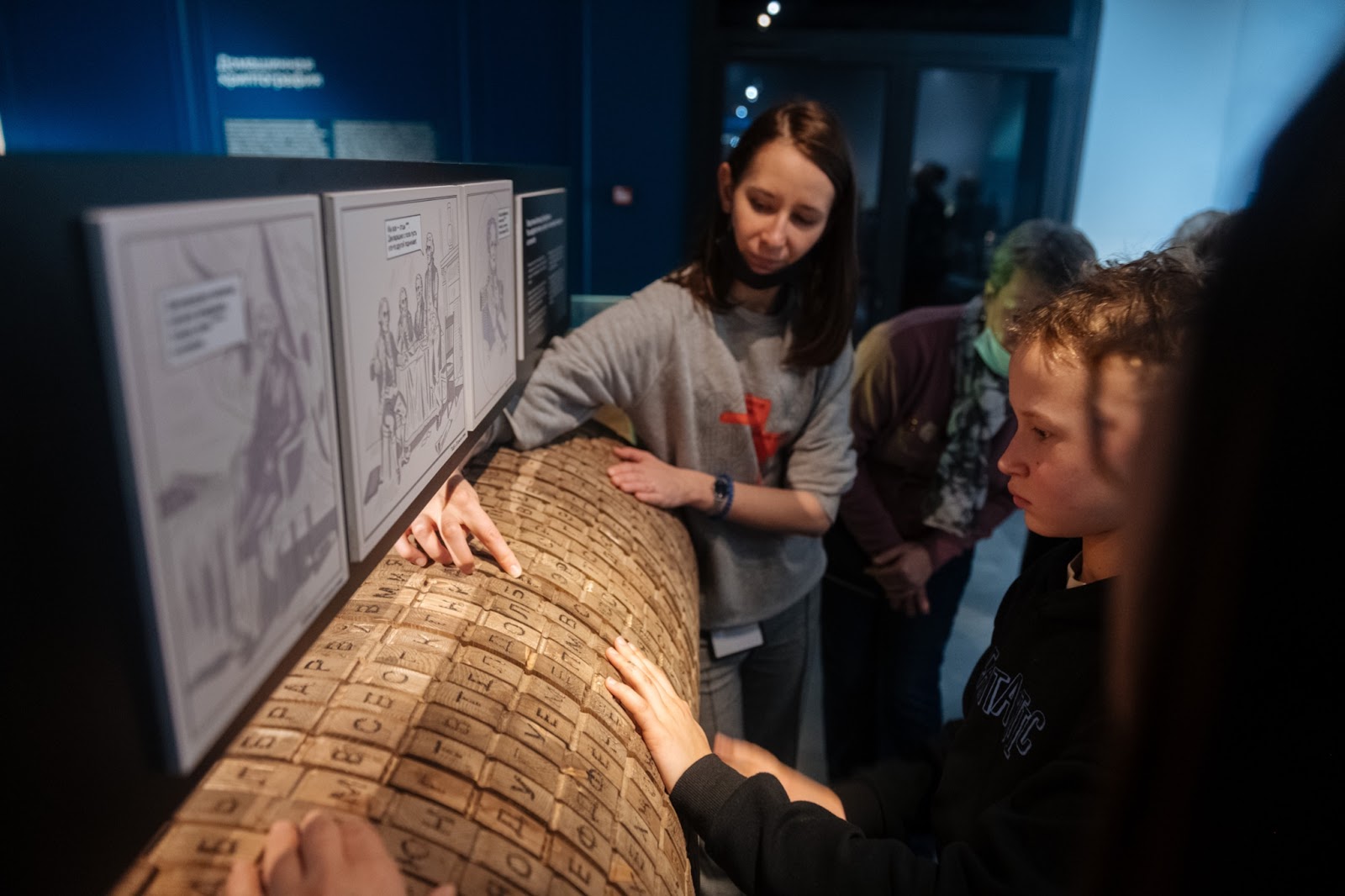 Audio description: a coloured photo. A halflit museum hall. Children are studying Jefferson’s cylinder. It is a wooden cylinder made of several discs slipped onto a single centre pin. Each of the disks has letters stamped on it. Children are touching the device. A young woman is holding the cylinder still and pointing her finger at one of the letters. Black and white pictures describing the invention are fixed above the cylinder.

On Plans For The Future

The museum will be closed for the summer. “In the fall we hope to launch an audio guide for the visually challenged visitors, and alsoput into operation audio descriptions for visual installations. We are constantly perfecting our museum’s accessibility program: adding mnemonic diagrams, plaques in Braille, making new tactile copies for our exhibits if we see that we need more of them for specialized guided tours for sightless and visually challenged guests,” Nikita Bolshakov adds.

He says that museum employees want visually challenged patrons to come to the museum as often as possible. “We do not aim toattract the maximum number of sightless and visually impaired persons to our Museum, but we would like them to know about thisplace and be able to come here whenever they like,” Nikita Bolshakov points out.

The Cryptology museum offers its sightless and visually challenged patrons the opportunity to take part in general guided tours around the museum and also in topical tours dedicated to a certain subject in the history of cryptology. In the fall they are planning to launch an educational program and continue working with the community and sightless experts. The museum employees want the inclusive display area they are creating to be interesting for sightless persons. They would like them to learn about cryptology and get the idea what it is about.