From jogging in a park to international competition: how I prepared for Boston Marathon and run it online. Part 1

Audio description: photo in color. A silhouette of a slim girl running with a setting sun and orange clouds behind her. She has a baseball cap on her head and a short ponytail.

This year Elena Fedoseeva, a visually impaired sportswoman and journalist, has run the Boston Marathon, which was happening online due to the pandemic. In her article for “Special View” she told her story — how she started running and how she prepared for this big event.

If 10 years ago anyone told me I would run — I would consider this impossible, and even funny. If 5 years ago anyone proposed me to run 42 kilometers — I would absolutely refuse, justifying this by my belief that marathons are for professional athletes or madmen. But today I have 6 marathon medals already, and I am neither a professional athlete, nor a madman. I have 6 medals, but only 5 marathons, as I managed to run the famous Boston Marathon and the Tzarskoselsky Marathon* simultaneously. Well, in 2020 due to covid-19 pandemic the 124thBoston Marathon was held online, but my end running goal was to get the right to participate in it, so I am happy I achieved it. But first things first.

HOW TO START RUNNING. 3 KILOMETERS. 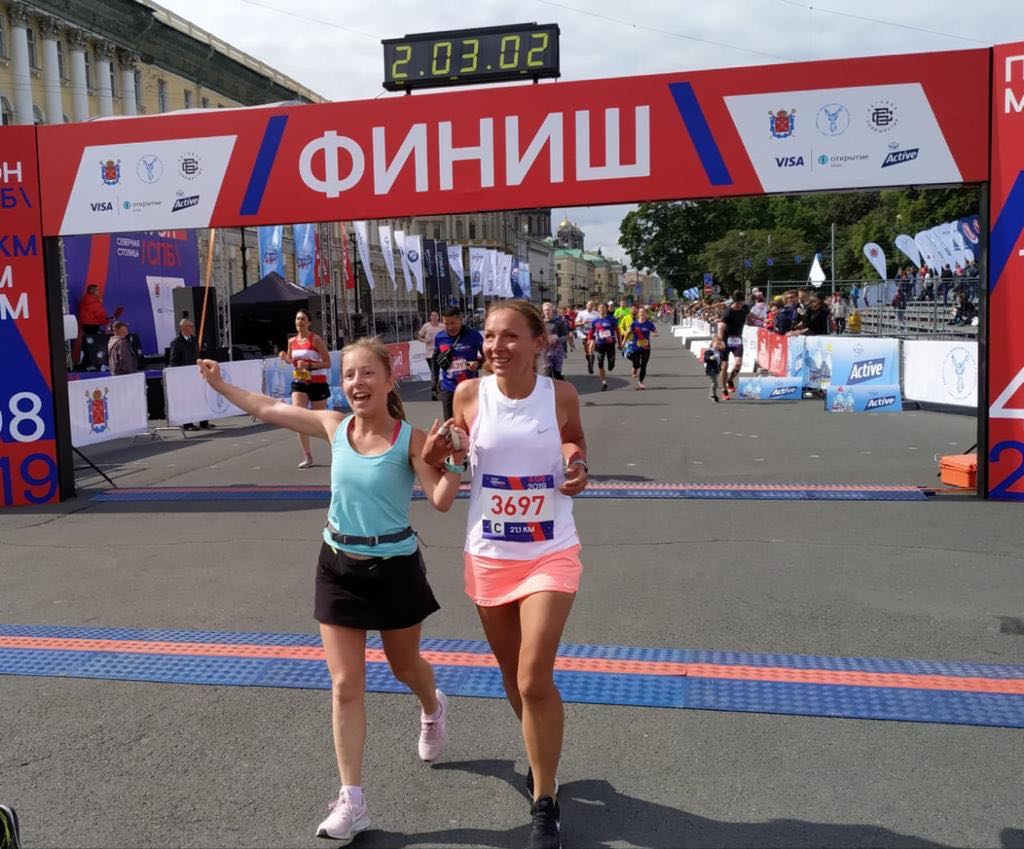 Audio description: photo in color. Bright day. Elena Fedoseeva is crossing the half-marathon finish line hand in hand with the leading girl. They leave behind the red arch with “Finish” sign on it and the electronic display that shows the time. It is 2 hours 3 minutes and 2 seconds. Both girls are wearing T-shirts and short sports skirts, they are smiling. The rest of the runners are finishing behind them.

When somebody asks me, a person who cannot see, “Can you really run 42 kilometers?” I answer — “Yes, I can, and many others can”. Of course you have to train and prepare your body step by step to do that. When I was a child and then teenager, I was quite skeptical about sports. Yes, I admired the athletes who demonstrated strength and endurance of the body, but I never wanted to be in their place, and each year brought a medical certificate stating I was not recommended to take and sports activities to my PE teacher. It seems I avoided sport exercises just because they appeared unclear for me and being included into any of them would mean stepping out of my comfort zone. My visually impaired friends did skiing, swimming, were riding bicycles, playing football and goalball, and I knew it was all possible, but never desired to be part of it. Only after graduating from school I suddenly realized I want to start skiing, ice or roller skating, go to the pool and climb the mountains. But all this had to happen together with my friends, in nice natural surroundings, not during PE classes. And this was the period of time — the period of sports experiments — when running entered my life.

6 years ago a project called “Marathon in the darkness” was launched in Moscow, organized by Julia Tolkacheva — a rehabilitation specialist, trainer and Master of sports of international grade in karate. She was inspired by the foreign visually impaired runners and triathletes and decided to help her compatriots with visual disabilities start running, which seemed to her the most accessible option of physical activity: for this you only need a pair of sneakers, while a visually impaired runner will also need a leader — a person, who will run side by side and help him or her navigate via a binder shaped like an 8, which both the runner and the leader hold in their hands. By the way, the leaders wishing to help the visually impaired people run came quickly, while there were too few of the para-athletes ready to participate. The guys visited the organizations involving visually impaired people and invited them to take part in the new project. I was one of those invited and went to one of the first trainings — not because I wanted to run, but to support good people in their good initiative. And then — I couldn’t stop. I met Katya, my first leader, in the training, and soon we became friends. Our conversations could go far beyond sports, and we could meet to go together to a shop or a café. Katya was with me, when Julia explained what the right leg position for running shall be, and then she was running nearby watching me carefully, so that I didn’t stumble. Besides, Katya inspired me.

Since for my musculoskeletal system running had become a completely new form of physical activity, very soon I had to learn myself what the sports injuries were. Achilles tendons were the first to suffer, and the inflammation didn’t let me walk even, not to mention running. Katya and I were looking for the solution together, she bought sports medicine for me and accompanied me for my visits to trauma specialists.

“According to the you have broken your calcaneus”, said the doctor in one of the Moscow hospitals. “That’s impossible!” I protested, and Katya added: “What are you talking about? The tournament is in a month!” “I don’t see any clinical signs of a broken bone, but it is clearly broken according to the image, and I need to put a cast on it”, the doctor concluded. I refused. The doctor demanded that I signed a written refusal and prohibited running. I signed the refusal, but didn’t stop running. I felt I had people around who trusted me and lived through all what happened to me together. Besides, I started enjoying the regular physical activity that made me feel tired afterwards, but so happy and satisfied with what I achieved.

I am describing all this in so many details to highlight the fact, that starting running, or practicing any other sports, honestly, can be hard and even painful, but it is easier to overcome if there are people who trust you. When I first managed to run 300 meters, holding Katya’s hand, I felt awful, and this would be the end of my running career there if not her support and my persistence. But the distance kept growing and the body gradually got used to such strain to finally feel true enjoyment without suffering. 2 months after our first training Katya and I run 3 kilometers in a race organized by Julia Tolkacheva and “Marathon in the darkness” project team in Luzhniki, and not just run, but got the 2ndplace among ladies. This was my first ever running start.

After 3 kilometers were done, I continued training in “Marathon in the darkness” project, practicing both special running exercises as well as those from general physical training. Alongside with it I started running long distances accompanied by the leaders whom I cannot dare to call volunteers, since all of them were my friends first of all. Katya got married and moved to Odessa, but before her leaving introduced me to another Katya, who soon moved to Italy as well. Thanks to some unknown forces protecting the runners I always had people nearby who were ready to run in the Moscow parks and embankments and could have a coffee and an interesting talk with me. Moreover, they helped me navigate through very specific sports topics: how to choose running shoes, which clothes would suit best for winter running versus summer, what is the healthiest food to eat before and after training. One winter I and my leader Ruslan participated in one of the amateur winter starts in Filevsky park. This was where I run my first 10 kilometers. It was a hard race, I wanted to get off the distance or change to walking to get to the finish, but I managed. After reaching the finish line my discontent was gone and the feeling of happiness and satisfaction from self-overcoming came instead. And then I had spring, summer, autumn tens which brought me memorable medals and vivid emotions. 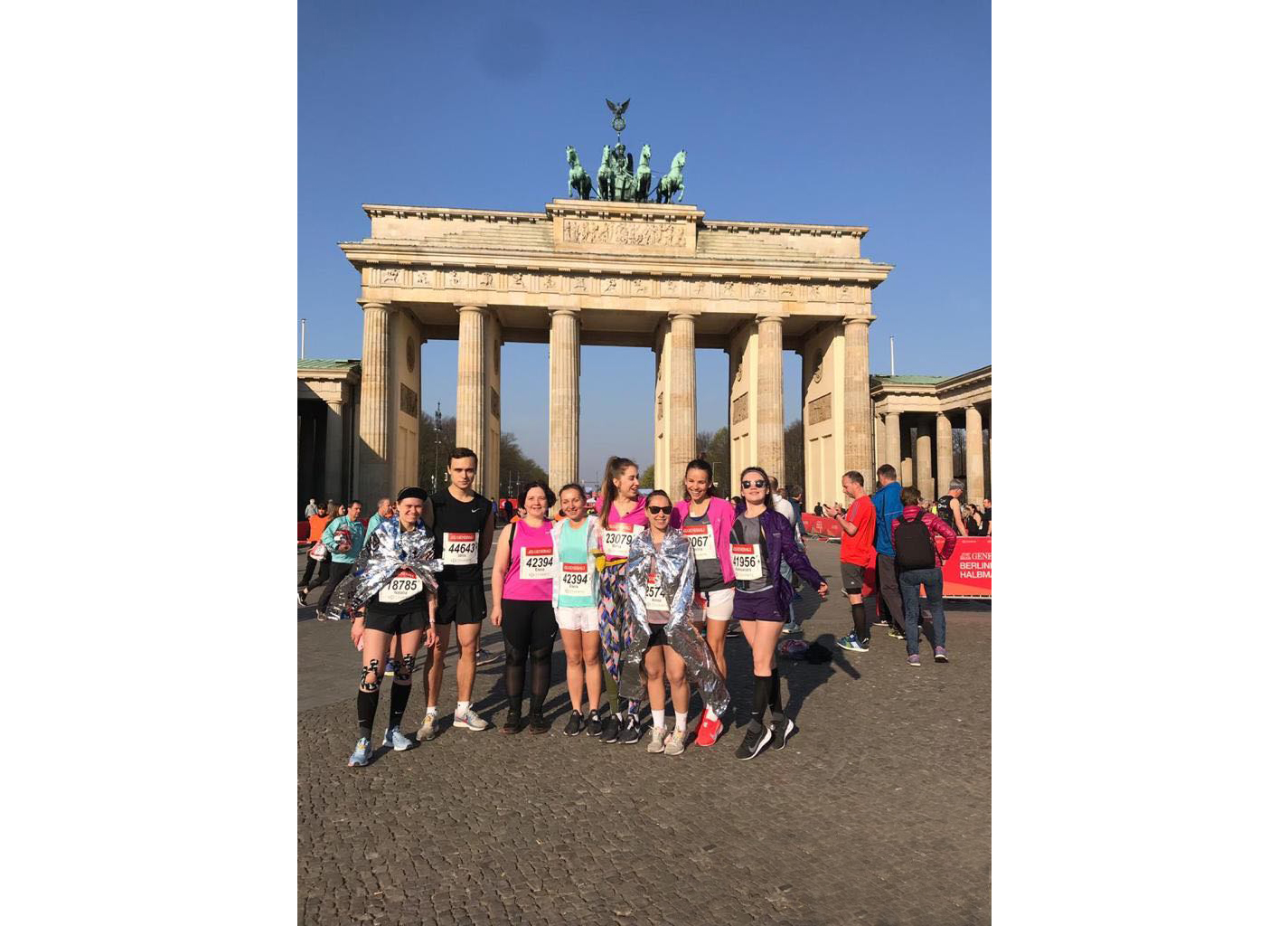 Audio description: photo in color. Bright April day. The Berlin half-marathon participants are standing in front of the Brandenburg Gate. It is the Arc de Triomphe built with 6 columns with a slab placed onto them. The Gate is crowned by a statue of an Ancient Greek goddess riding four horses. Young sportsmen and sportswomen are wearing uniform with numbers on their chest. All are smiling. There are other marathon participants behind them.

It is a huge distance between 10 and 21 kilometers and for me this distance counted not only meters, but dates as well. I started cycling, gave birth to a child and changed my main profession and career. Cycling helped me to get back to running after childbirth. When my kid was 2 months old I started cycling at home on the exercise bike, and 2 month later we went together to Sochi to participate in the amateur championship, as part of the team of the “Sports for life” charity foundation. I had to train while the tiny one was sleeping, early in the morning or late in the evening. At the same time one of my leaders started to help me running near my place of living. Our rides were slow, but we aimed not to increase the speed, but duration. And then I was invited to shoot in NIKE advertising video. I will not tell now, how it happened and why, this is another story. The most important output of it was that I managed to get ready for the half-marathon and started thinking quite seriously about taking a marathon distance.

After the NIKE video was published I got so much more and more questions about how many kilometers I run, how often I train and which distance I prepare for, that finally I simply had to register for the Berlin half-marathon. It happened half a year before the actual start of the marathon, so I decided to devote this time to long running to grow the running volume. In one of the group trainings with NIKE running club I met Anya. Now, remembering the moment when we met, she says that friendship and respect appeared between us at the “first hand touch”. Anya was the one to freely talk to and to fill confidently with at the distance. She was happy to accept my proposal to meet once per week before workday and run in Gorky Park. She had both the strong character and a huge running past to slowly increase our running distance and finally we reached 18 kilometers. But one training per week was definitely not enough to get ready for the half-marathon. I had to plan my free time very carefully, so I decided to find a leader in Troitsk, close to my work place. It took around a month, but thanks to social media I finally met some runners and triathletes in Troitsk and they in turn introduced me to Lena, a girl, who agreed to become my leader during the trainings. In spring 2018 I went to Berlin as part of the NIKE team and run my first half-marathon accompanied by one of the NIKE team members. We finished at the Brandenburg Gate. This was where I began to think — just think, nothing real or serious yet — about taking a marathon.