The avocation squared: how the inclusive school in Udmurtia works

Audio description: photo in color. Light school corridor with a row of big windows on the left and a handrail along the wall on the right. Yellow tactile marks can be seen on the floor. In the end of the corridor a group of elementary school pupils is standing.

The school № 53 in Izhevsk was opened in 1984 and in the beginning it was quite an ordinary public school. 13 years later the school welcomed first visually impaired students, and later on — sightless ones. The students with no visual disabilities now study in public classes and the visually impaired ones go to classes for students with special needs. The teachers went through professional retraining in typhlopedagogics (describing the methods of teaching visually impaired people) and typhlopsychology (studying the mental development of people with visual disabilities of any kind).

“Special view” tells how this school has organized a unique art space where teachers and kids create together.

Out of 800 students of the school one third has visual disabilities. It is for them that the tactile printer works, and portable magnifier, and speaking calculator. But an unusual school has to pursue unusual goals, states Nadezhda Zbar, the school director. The kids need not only to finish the secondary school basic program and learn to use the smart technologies, but to get prepared for the real life as well and understand how to win and fail, how to fix the water tap and make dumplings, how to think on their own and create. That is why there are no second-priority classes and the teachers are chosen with great attention.

“How do you explain physics to a child who cannot see? A super-teacher is needed, a teacher squared, with fire in his eyes and non-standard ideas in his heart! Or take the Russian language teacher — she works with visually impaired children in such a way, that after they go out of the classroom they say: ‘It was not a lesson, we had a theatre play!’ And her husband, the teacher of technology, is our chief Kulibin. Kids adore him”, Nadezhda Zbar tells. 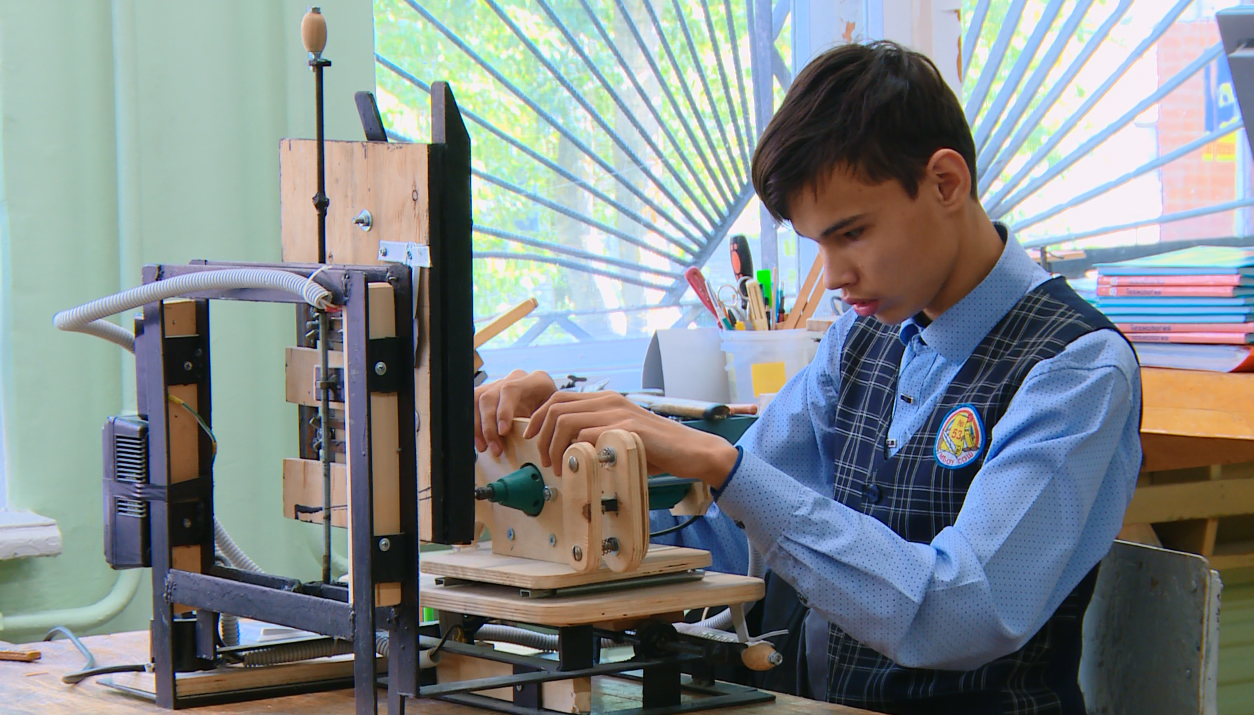 Audio description: photo in color. Carpentry workshop. Anton Ponomarenko, a dark-haired teenager wearing blue shirt and check jacket, is sitting at the drilling machine near big barred window. His both hands are lying on a wooden rack, and the drill is placed in the center of it. In front of it we can see a wooden work piece installed into a metal frame.

We are going to the carpentry workshop where Alexander Kuryshev is teaching technology.

“When I just started working 6 years ago, there were sightless and visually impaired children, all were sitting in the classroom, but could only listen. So I decided to show that everything is possible and accessible, that they can do all the things which everybody does. Don’t wait, invent yourself!” the teacher says.

Alexander Kuryshev knows what he is talking about. He is the author of dozens of inventions which are stored right here, in the studio. Pneumatic hammer and miracle planer, drilling machine and machine for metal cutting. The stands and racks for metal cutting were assembled using the parts of the old chairs by the teacher and the children together, and it took them 1.5 years to complete. Now the machine is working through transformer producing 12 volts, and the teacher assures there is no danger at all.

“The principle of operation for all the machines is same — you have to use both hands at the same time”, Anton Ponomarenko, the 8thgrade pupil, demonstrates how the drilling machine works. “Press the machine handles simultaneously to close the contacts, and the machine is working. When you loosen the hold — the machine switches off, so absolutely can’t drill a finger. We’ve been working with these machines for 3 years now, since 5thgrade. The principle is clear, now we can switch to a normal drill”.

“These inventions are not just mine”, tells Alexander Kuryshev, “A lot was created together with the students. Look, here are the checkers and dominoes that we have modified. Such a game set for the visually impaired is quite expensive, while we crafted it from cheap materials, for around A sightless person perceives everything by touching, and this was the thought starter for us here. We covered the white checkers with, let’s say, woolen cloth, and the black ones — with cotton, even cutting something out. Our kids gladly play”.

The project work is a must in this school. There are lots of ideas. They are created all together and are tested right here right now, in practice.

“Hello. I am a robot-guide. I am ready to help you. Please tell the classroom number. I will help you walk there”, the robot is saying with a synthesized voice. It resembles a lawnmower or an aluminum prism with wheels and long arm or handle. “This is just a prototype”, Alexander Pavlov, the teacher of computer science and robotics, looks embarrassed.

The robot got the name “Interno”. First the senior students got an idea to create an assistant to move around the corridors of a single floor, but later on the project expanded and turned into a prototype of an automatic guide for sightless people. In the future it might replace the guide dog. 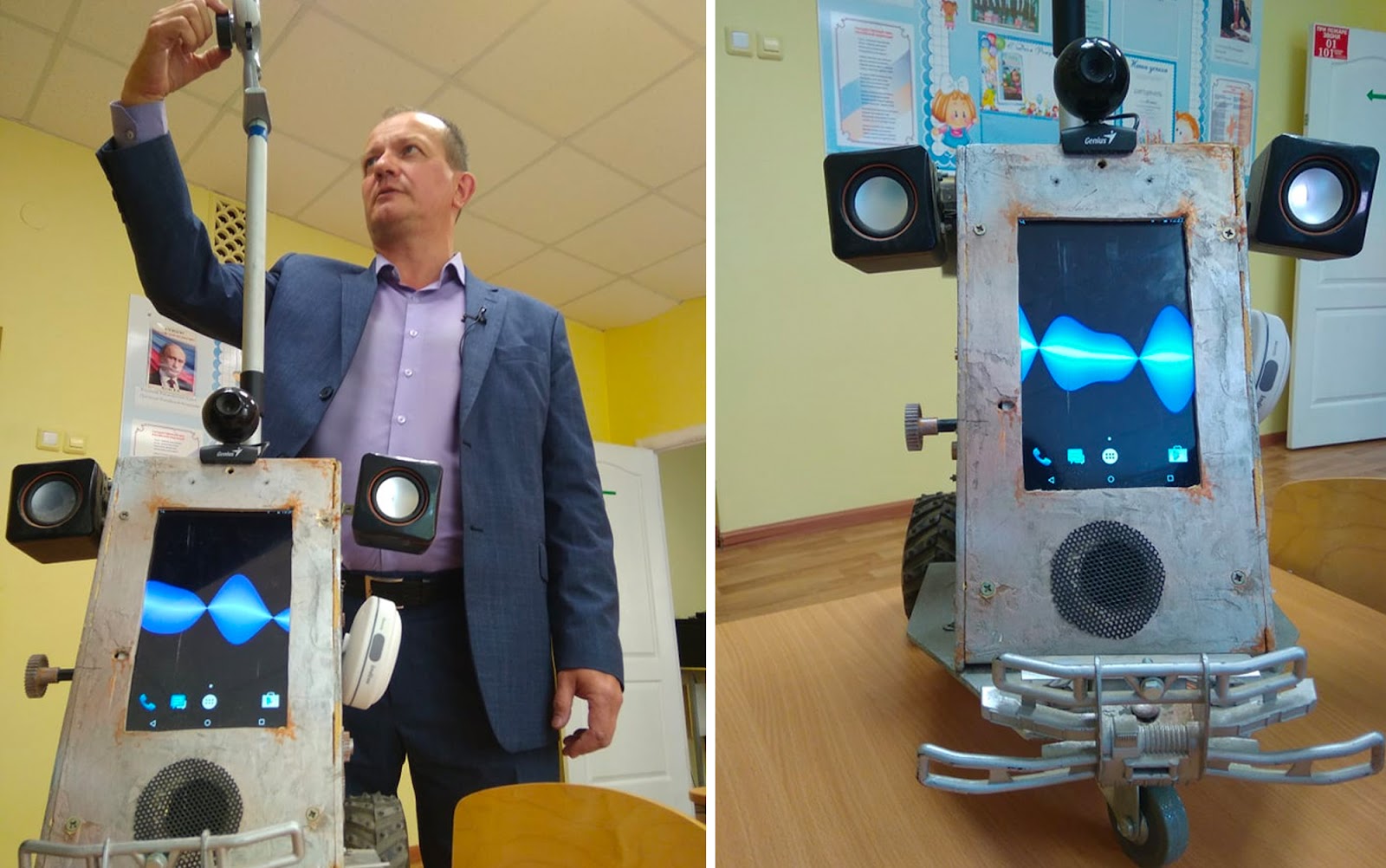 Audio description: a collage of 2 photos if color. Classroom. Alexander Pavlov is demonstrating the operating principle of the robot-guide which is standing on the desk in front of him. The teacher is a middle-aged man wearing violet shirt and blue suit. He is adjusting the sensor placed in the long control handle. The second photo shows the robot‘s close-up. It is a machine with a central sensor panel in a grey rectangular frame. The robot is standing on 3 wheels and it has a massive front bumper, a square speaker on each side and a small camera on the top.

“We crafted this prototype using only available materials”, Alexander Pavlov reflects, “What’s inside is the most expensive. There we have a pad, a microcomputer, and a rechargeable battery. The robot’s front panel is a sensor screen. The engine we borrowed from the electrical screw drivers, and added the camera and the speakers. The prototype cost us 45 thousand rubles.”

The robot’s body, which looks metal from afar, was in fact made of plywood and was just colored in grey. The guys added some design elements too — the old computer fan, so the overall look of the machine is quite futuristic. The robot can be controlled with smartphone via external wireless module or through the sensor screen. The inventors plan to improve the construction and move control to the handle. This will make it possible to change the robot’s work mode right on the way.

The robot is set ready at the starting point. There is a long school corridor with tactile marks in front of it, and a number of classrooms on the right. Alexander commands “Classroom number 209”, the robot slightly trembles and starts crawling ahead.

“We installed sensors and detectors into the robot, so it can react when it finds an obstacle on its way. Here the surface is flat, we can even increase the speed, but we anyway placed a sensitive front bumper to be on the safe side. When the robot comes across any obstacle, it immediately stops”, says Alexander Pavlov.

“Interno” reaches the destination point, stops and reports: “Classroom number 209”. Now the students brainstorm on further robot’s improvements. One of the ideas considered is to install a GPS navigator.

Stanislav Tsenev, a graduate of Yakshur-Bod’inskaya school for visually impaired, specializing in maths and programming, the teacher of maths and programming in the above mentioned school № 53, has recently become famous across the whole country. He was the one to systemize the most commonly used symbols in Braille and to collect all of them in a separate tutorial.

The guidebook lists the main symbols — alphabet, punctuation marks, math pictograms for calculations, fractions, power, root, and signs to depict parts of the word and sentence.

“While the way to mark letters and numbers seems clear, there is no unified system for symbols. The information is confusing, for example — there is often no connection between the original word and the Braille designation. It is easy when you write it in the normal way: sine is ‘sin’, cosine is ‘cos’, that’s it. In Braille you will often fail to find a one single symbol for this. For instance, if you need to indicate the square root, you have to write the root index sign first, then the root index itself, then the closing sign, then the radicand and then the radicand sign. Complicated, no? The fractions can be written in 3 different ways! And you need to know all of them. I systemized all this in the guidebook”, Stanislav Tsenev tells. He plans to further improve the book by including a section for chemistry symbols.

The teacher says that the tutorial was better accepted by the adults: colleagues and parents found it interesting, while the children prefer to look for the maximum connection with the reality, rather than studying catalogues and archives. Take the geometry lessons: it is not enough to simply translate the theory in Braille; the teacher tries to find a real-life example to help the sightless pupils literally “feel”, “touch” the subject.

“In the lesson devoted to triangles I always explain where they can be found, so that a child hearing a word ‘roof’ can clearly understand its shape. If this is a complicated object, with electrical wires, for example, I try to create some model or prototype. You have to invent constantly. Nowadays all the visually impaired students of the higher grades have smartphones, and I fully support the idea to actively use them in life as well as during the lessons. We create informational tests and exercises that are not available on paper and you can do them only with smartphone. This makes both the students’ and the teachers’ lives so much easier, as we’ve create a database of tests, something like a library, that my colleagues can use as well. Even the beginners who have just started working with visually impaired and sightless students can take this database and do great during the lesson, with no special effort required”, shares Stanislav openly.

A number of tests here are done exactly as described — with smartphones and special programs. Closer to reality. By the way, making dumplings is as well a real-life skill, which is being taught to the visually impaired children. For the last 5 years the school has partnered with Izhevsk College of Commerce and Economics, which provides long courses to teach bakers and chefs. The graduates get their College certificates together with the General Certificate of Education as a sign of another step towards their own independent life.