Audio description: This is a colour photo. A girl is standing at the top of a high cliff and is looking at a panorama of the sea. It is a clear summer's day. Pointed grey-brown cliffs covered in green vegetation rise in a bright-blue sea forming a crescent-shaped bay. Far behind the cliffs, the horizon is visible above the water. Beneath the cliff on which the girl is standing, there is a small town with red-roofed houses and a road along the coast.

Summer is like a separate short life and, traditionally it is time for a holiday. In Europe alone, about 127 million people with disabilities travel every year. In order not to miss this massive human flow, city authorities try to do everything possible to create a barrier-free environment and attract new tourists. We have reviewed the latest apps designed for blind tourists in different corners of the world and learned how people with visual impairments become tour guides in their native cities and towns.

Mobile technology to the rescue

A few months ago, SpecialView covered the interactive guide Discover Moscow(Google Play, App Store) available for users with visual impairments. Now the app can provide information about the landmark places of the city and important historic personalities, as well as offer a thematic audio tour.

In Minsk, the capital city of Belarus, they have also conceived the idea of simplifying movement around the city and launched a guide app. The app is focused on the main facilities of urban infrastructure: schools, pharmacies, banks, post offices and cafes. According to Office Life, the Kroki Na Gukinavigation system helps the city's blind residents and tourists navigate their surroundings with the help of special devices – informants. They emit sound signals when connected to smartphones equipped with the navigation system. To be able to use the route, you will need to download the BuzzPoint mobile app (Google Play, App Store). Beltareports that the pilot project is also operational in Vitebsk and will soon be underway in the towns of Orsha, Novopolotsk and Gorodok.

A great deal of attention is given to barrier-free tourism in Germany. According to the European Commission website, the Guide4Blind app for Android has been launched in Dusseldorf. The app will help visually impaired tourists safely navigate the city streets. The app can create routes and warn you about obstacles on the way. Although the locals jokingly say that they still prefer guide dogs, the authorities hope that the new app will make travelling around the city much simpler. 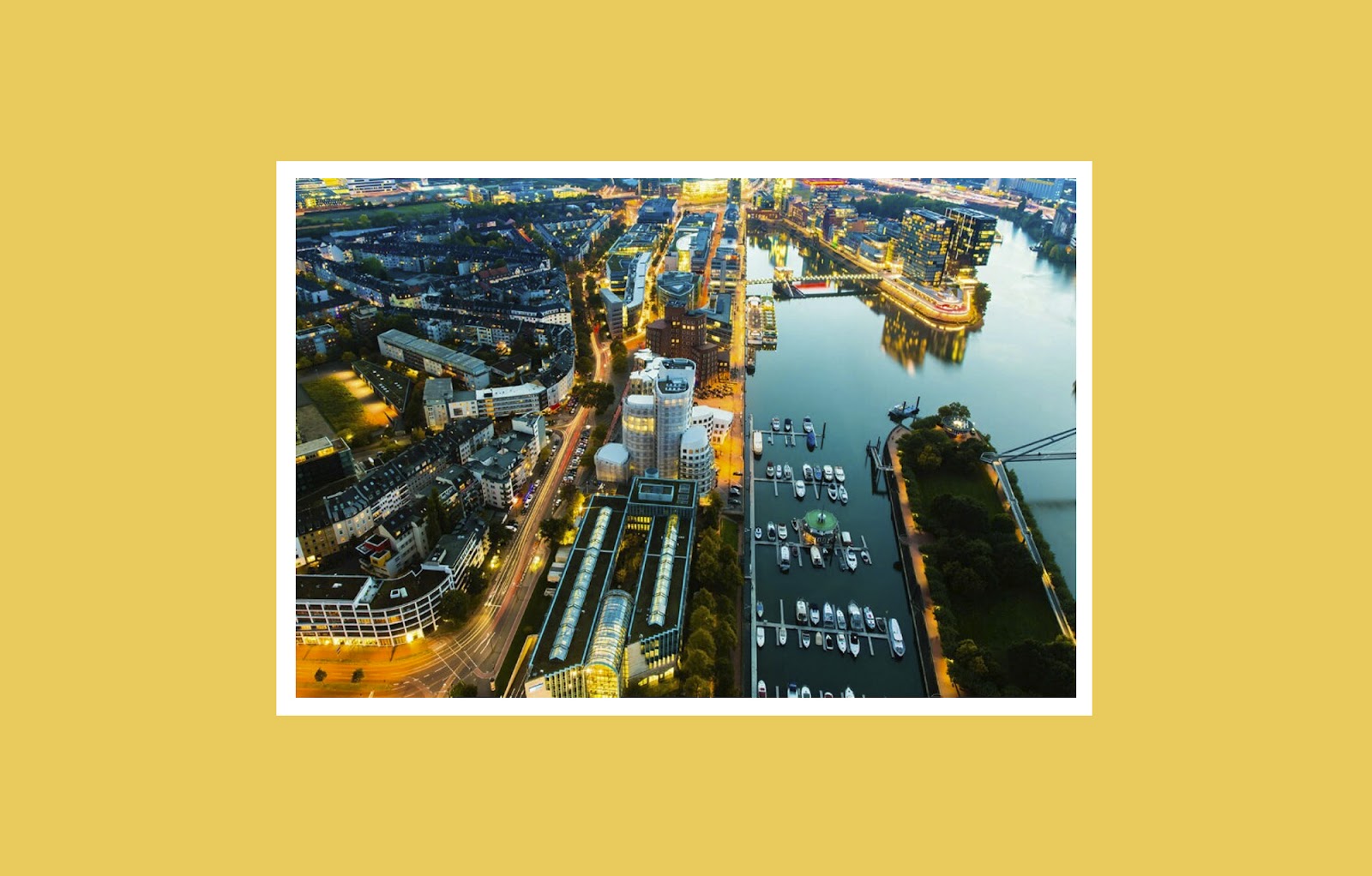 Audio description: This is a colour collage. It is a colour photo in a white frame against a yellow background. It is a panoramic bird's-eye view of Dusseldorf at night. The port city is brightly lit. Moving cars colour the streets in red and yellow, lit windows glow in the night, and buildings are reflected in the water. Boats and yachts are moored along the bank, and there is an oval green island in the water.

Also, from this summer, a new guide app awaits visitors to Jerusalem. According to the Imperial Orthodox Palestine Society, a touring programme for pilgrims with visual impairments has been launched in the ancient city. The app (Google Play, App Store) was developed by the centre for blind people with financial support from the town, charitable organisations and travel agencies. The guide app is available in Russian, English and Arabic, as well as in Hebrew.

Despite the numerous tours, blind tourists still find independent navigation challenging in an unfamiliar environment. The Los Angeles Times talked with the developers of the Aira app (Google Play, App Store), which should solve this problem. Subscription-based, Aira offers people with visual impairments remote access to sighted guides, referred to as operators or agents. The user starts the app and, using a smartphone camera or Google Glass, transfers the video to the agent. The agent, monitoring the real-time streaming video, describes everything happening around the user, for example, helps them to read a menu in a restaurant or find friends in the crowd. You can try out the app without paying a monthly fee: more than 35 American and international airports provide Aira services to visually impaired tourists for free.

Thanks to new technologies, you can travel easily and safely either by plane or train. Railway Age tells the story of James Grant, a second-year student at the University of Kent, UK, who developed the Stay on Route railway app (available in the App Store). The app allows you to choose the departure and destination points and set up alerts, for example, an alarm or vibration mode for the phone to notify you when a train is approaching the station. The developers believe that the app will appeal not only to the blind, but also to passengers concerned about missing their stop whilst they read or relax during their journey.

Convenience for blind tourists is also a matter of concern in Barcelona. To make public transport more accessible, the city created the NaviLens system (Google Play, App Store). According to MIT Technology Review, it took a few months to prepare the launch of this app. During this period, bright colour stickers reminiscent of pixel Space Invaders appeared on the walls of many buildings, train stations and bus stops. They turned out to be not a new creation of graffiti artists, but a practical solution for blind passengers. 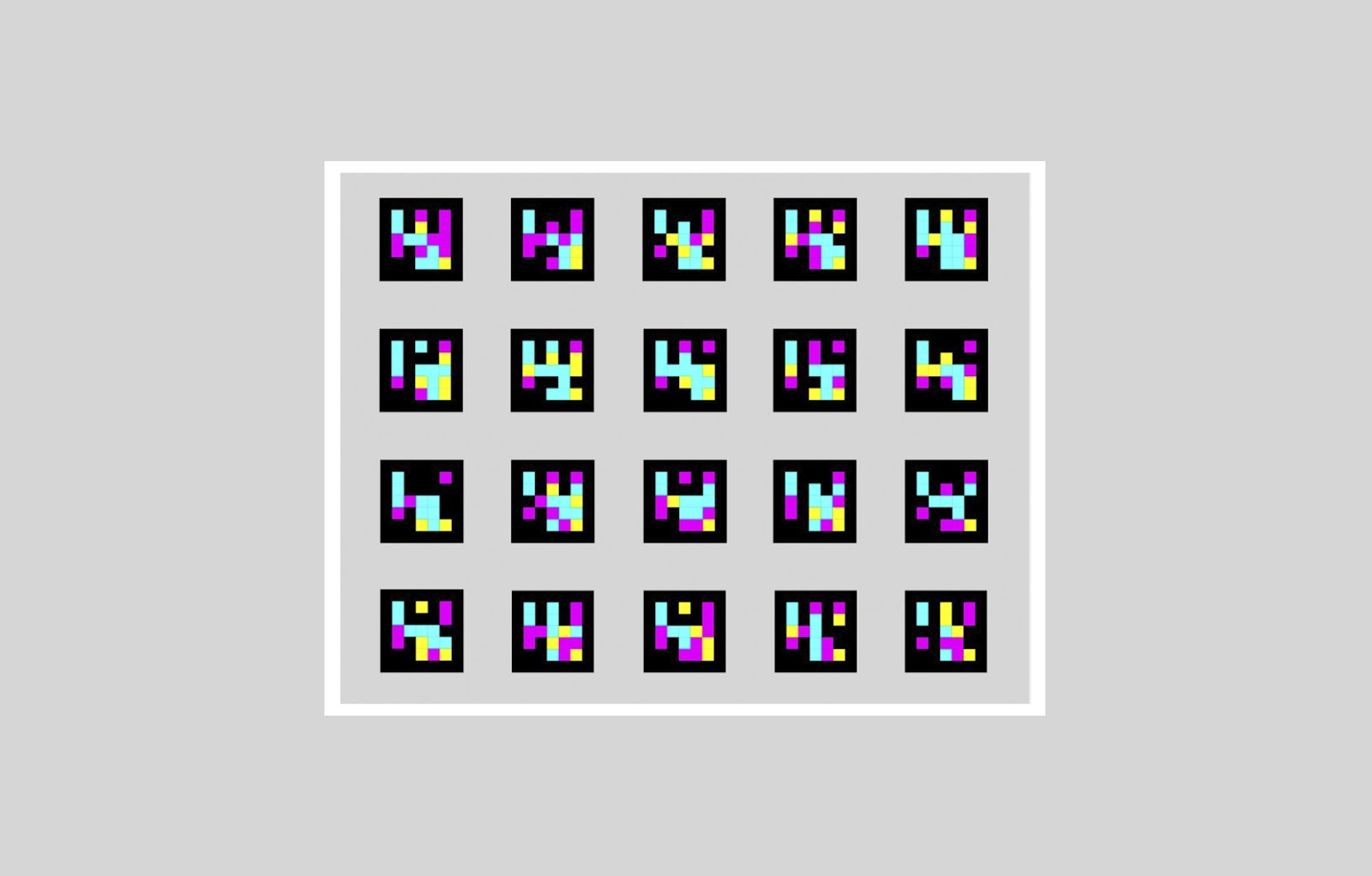 Audio description: This is a colour graphic image. There are five columns of four black squares in a white frame against a grey background. The black squares resemble QR codes and contain colour pixels of pink, blue and yellow. Each square has its own combination of pixels.

NaviLens covers the city's system of buses, trains, trams and even the Montjuïc funicular railway. Each sticker contains encoded information about the transport schedule and routes. The codes are embedded into the images to be recognised by the mobile app from up to 12 metres. You do not need to understand Spanish: the app is available in a few languages, and the phone automatically determines the user’s native language. It is a very useful feature for this city, which is visited annually by almost 10 million people.

If no one is willing to solve a problem, get proactive

The development of a modern city requires the building of an accessible environment for city residents and visitors. The situation was much more complicated as far back as 20 years ago, and it seemed that the world was inaccessible to blind and partially sighted tourists. Amar Latif is one of those who has encountered this problem. By the age of 18, he had lost 95% of his eyesight, but did not intend to turn into a couch potato: “I knew that behind the blur surrounding me there was a world awaiting discovery.” During his third year of study, Amar transferred from the University of Strathclyde in Scotland to Queen’s University in Canada, which became his first ever trip.

However, he soon realised that organising independent trips around the world was not as easy as just studying abroad. Every travel agency refused to arrange an individual trip for the blind tourist. Amar decided that the tourism industry needed a new vision, and in 2004, in Leeds, UK, he created Traveleyes, the first travel company which brought together sighted and visually impaired tourists.

This approach allows you not only to open Europe, America, Africa and Australia to people with visual impairments, but also to give a unique experience to sighted tourists.

“You get to do things you wouldn’t normally do. Once, in China, they got to touch the terracotta warriors. Imagine. And the act of describing what you see . . . You take in far more, somehow; you see things in a very different way. It may sound silly, but going on holiday with blind people opens your eyes,” says Wendy Coley, a member of the Traveleyes tour group, in an interview with The Guardian. 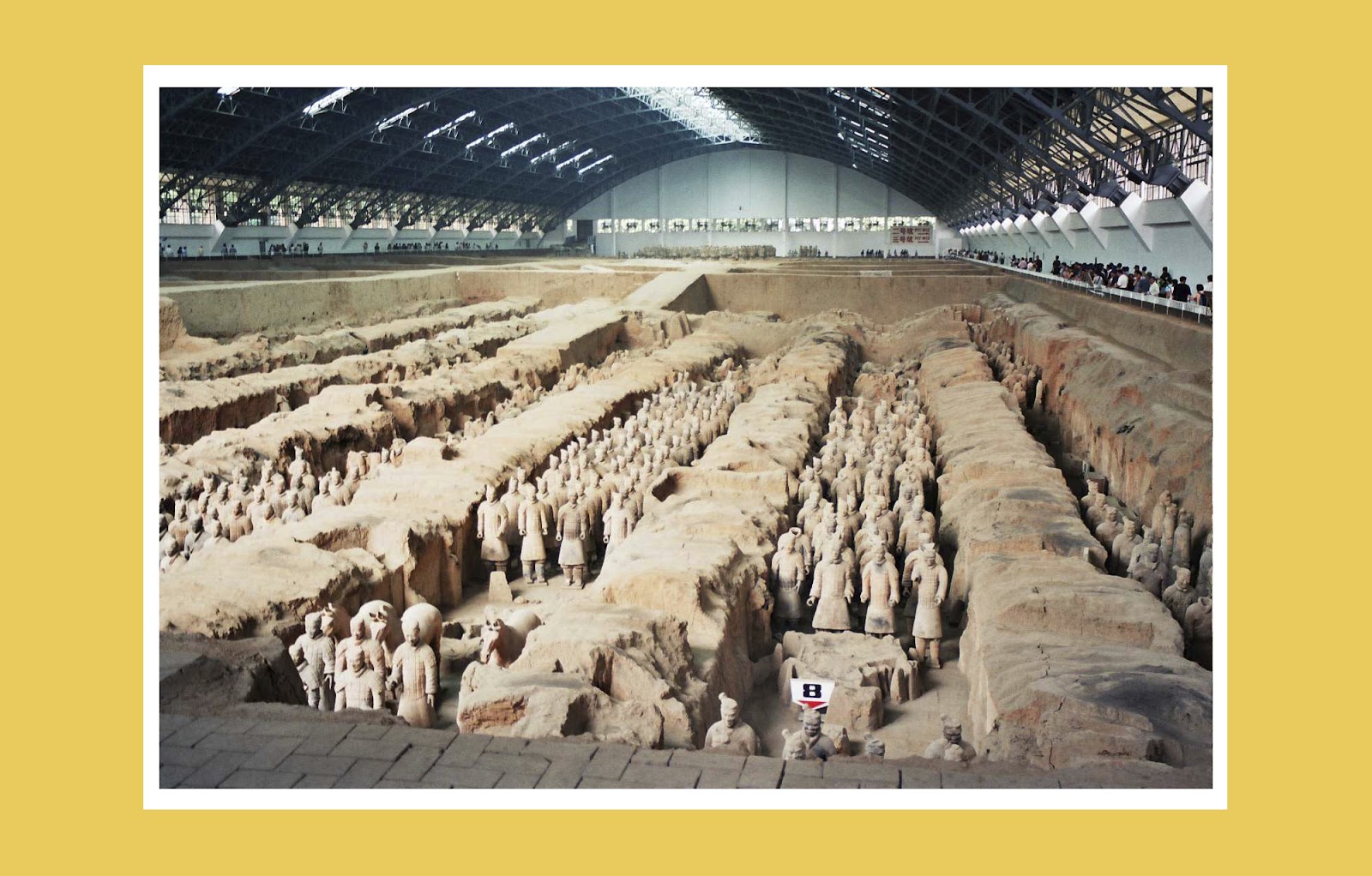 Audio description: This is a colour photo. The Terracotta Army archaeological site is a burial resembling a tomb. The tomb is a rectangular cavity up to three metres deep with clay walls; it has several rooms, or pits. Each of them has brick walls about two metres in width and hight. Between them, hundreds of life-sized clay human sculptures are standing in rows. The terracotta warriors are dressed in armour, with their hair tied in a high bun. Their armour made of metal plates connected by rivets and resembling scales covers their torso and shoulders. The warriors are standing with their legs and arms widely spread, ready for battle. Some of them have weapons in their hands. Apart from the warriors, there are horses in the pits. The tomb is enclosed by walls with an open girdered metal curved roof. People are crowded along the enclosure walkways.

Wendy is right: people with visual impairments not only embrace travelling, but also help other tourists to take a fresh look at the world. At 25, Vladimir Vaskevich has travelled all over Russia from Kaliningrad to Vladivostok, visited more than 20 countries, and he is now showing his native city, Yekaterinburg, to other tourists, both sighted and blind. He is convinced that the capital of the Urals is one of the most comfortable places for people with disabilities: the city is compact, and the most exciting areas are easily accessible.

Aleksey Orlov, the 24-year-old initiator of the Feel Saint Petersburgproject, helps to get the feel of the city. He acts as a tour guide and manages a large social platform which includes a series of routes, workshops for adults and children, training sessions and adaptive programmes for blind and partially sighted people.

Blind guides work not only on flat terrain, but also in the mountains. Special Viewhas already told the story of Divyanshu Ganatra from India and his unique inclusive cycling expeditions in the Himalayas. He lost his eyesight to glaucoma at the age of 19, but he continued to do sports, set up the charity organisation Adventures Beyond Barriers and became a guide.

American student Emilie Gossiaux lost her eyesight at 21 after she was hit by a truck. Following a tough rehabilitation period, Emilie was able to rediscover herself. A student at Yale University, she spent her holidays learning audio descriptions and, with support from the Metropolitan Museum of Art in New York, became a tour guide. Emilie's Labrador, named London, helps her to navigate around the museum halls. 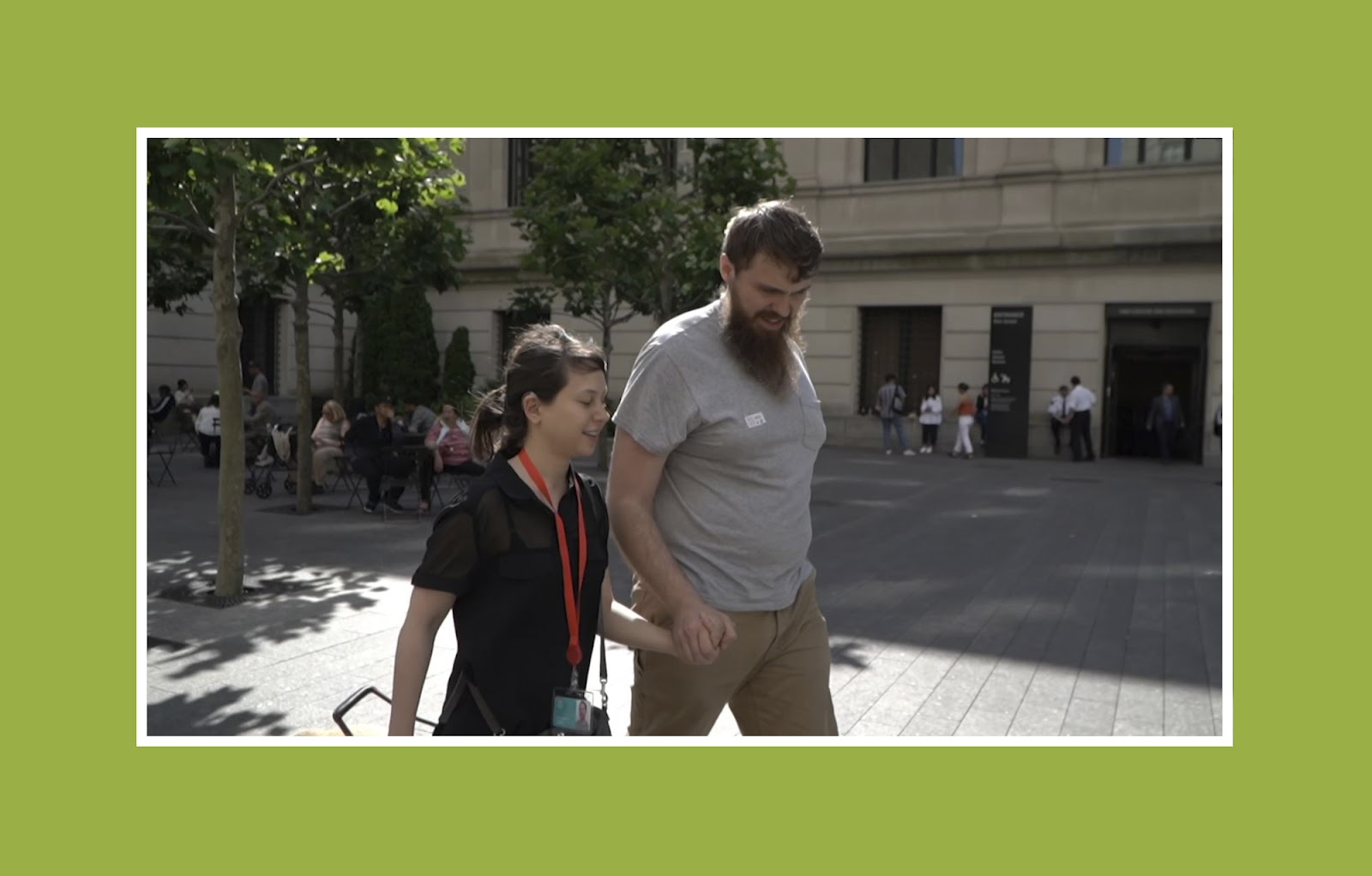 Audio description: This is a colour photo. On a sunny summer's day, a blind man and a blind woman are walking firmly holding hands across a city square. The woman is Emilie Gossiaux. She is quite short, dressed in black, with a badge on a red ribbon around her neck. Her brown hair is tied back, and she is smiling. The man is taller than her. He is dressed in jeans and a T-shirt. He has short light-brown hair and a long beard. His head is inclined towards Emilie. The building casts a shadow on the square. There are many people sitting at the tables and standing by the wall in the shade.

The purpose of museums is to preserve history and share it with everybody. Unfortunately, not all exhibition venues are ready for blind visitors. Bahram Khalfi from Iran, who lost his eyesight later in life, wrote a guidebook on blind tourism and, for over seven years, has been taking visually impaired visitors on sightseeing tours to the palaces and natural attractions of Iran. He was faced with a misunderstanding at the National Museum. At first, he had the museum authorities' permission for the blind to be able to touch the artifacts while visiting the place. However, after five tours, the permission was withdrawn, and all Khalfi’s programmes for visually impaired visitors were put on standby.

However, we hope that sad stories like this will be happening less often, and we wish our readers to have pleasant holidays this year. You will find more useful apps and lifehacks for tourists in our article.