Apostles of the Blockade Sky: How 12 Listeners Protected Leningrad during the War

Audio description: Audio description: This is a screenshot from the film. A male youth is bringing his palms up to his closed eyes. He is wearing a khaki tunic and peaked cap with a cockade. Trees are visible in the background.

In honour of the 75th anniversary of Victory Day, the Special View portal released stories about 12 blind residents of Leningrad who served as listeners during the Great Patriotic War.

An unprecedented event occurred at the time of the blockade of Leningrad — for the first time ever in its history, the national army enlisted blind people to active service. The city was subjected to incessant air raids. Buildings, warehouses and factories were destroyed by bombings, claiming hundreds of lives. The Leningrad Air Defence Army stood up to the enemy’s air force.

Various means were used to detect Nazi aircraft approaching the city. The Prozhzvuksystems were new to aerial reconnaissance. This search system consisted of a searchlight, sound detector and control station — all combined by synchronous transmission. The sound detector was an acoustic device with two pairs of horns: one pair moved horizontally and determined the range of the sound source while the other moved vertically and determined the altitude of the sound source.

After testing the Prozhzvukin real combat conditions,it became clear that the key element of the system was the listener — the sound detector operator. Successful operation of the system depended on the human factor. Ordinary Red Army soldiers did not always manage to hear the approaching enemy in advance.

Then one of the officers remembered the novella “The Blind Musician” by Vladimir Korolenko and suggested they should try out blind people as listeners. Initially,the idea was met with scepticism, but, in the besieged city, they used every opportunity. The debates went on at the highest level for a whole month, and the experiment was finally given the go-ahead. 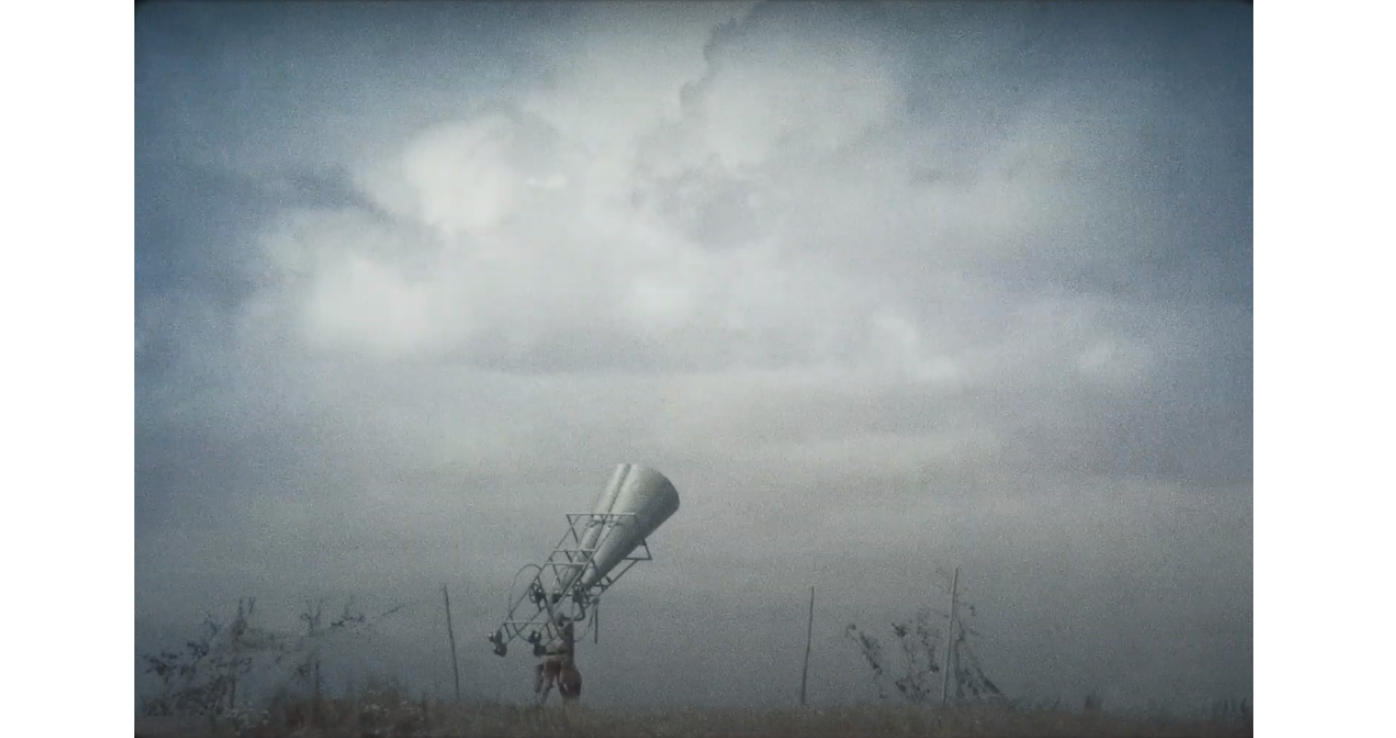 Photo: a screenshot from the film “A Russian Youth” (2019), directed by Alexander Zolotukhin

Audio description: This is a screenshot from the film. A  sound detector (metal funnel on a tripod) is pointed at the overcast sky.

The blind of besieged Leningrad

By 1942, there were about three hundred blind people remaining in the city. Most of them worked in the training-production workshops of the All Russia Association of the Blind (VOS) while blind musicians were engaged in concert brigades. When the Leningrad Air Defence Army announced that listeners were required, almost everyone submitted an application. The selection of candidates was very thorough — in addition to sharp hearing, they had to be physically strong so they could endure long hours of combat duty.

As a result, about two dozen applicants were selected and given special training. It was not enough to hear the sound— you needed to identify it correctly, defining the location of the enemy aircraft. According to the diaries of blind blockade veteran Pyotr Gorchakov, twelve men were taken in a military truck to the front line on 14 January 1942,where they were trained for another ten days. The listeners worked and lived in dugouts and were provided with military rations and uniforms.

The sound detectors were operated by a team of two soldiers, one of whom had good eyesight. He slowly turned the horns in various directions while the listener monitored every sound coming from the sky. It was very tedious work — you had to spend long hours in a static pose, propping yourself against the headrest. During duty hours, the listeners took off their ear-flapped hats and put on special helmets that almost covered their faces. The listeners often had to work under artillery fire and detect the sound of approaching aircraft through the roar of the cannonade.

Despite the hardships, the blind soldiers demonstrated a stellar performance. After just a few months, the listeners were able not only to detect enemy planes, but also to determine the range, altitude and even the type of aircraft. By the time the bombers reached the city, the air defence was ready to fend them off. The oncoming fire often forced the enemy to turn around and retreat. 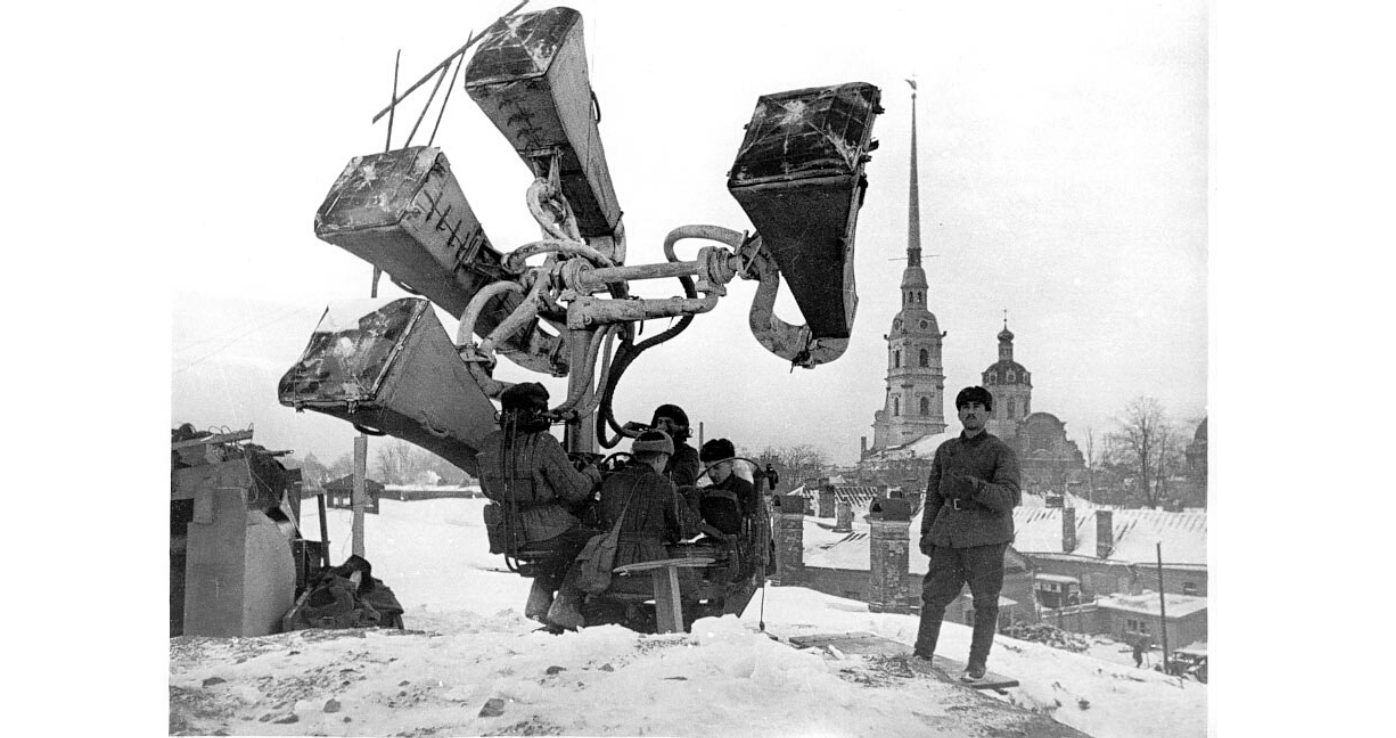 Photo: provided by the People’s Museum of the History of the St. Petersburg Regional Organisation of the All Russia Association of the Blind

Audio description: This is a black-and-white photo. It is a winter’s day. Four soldiers are seated at a four-horned sound detector unit. The horns are pointed at the sky at 45 degrees. The narrow ends of the horns are connected to the listeners’ bulky headphones by rubber tubes. Another Soldier is standing nearby. They are all wearing ear-flapped hats, quilted wadded jackets and trousers, and felt boots. The Saints Peter and Paul Cathedral is visible in the background.

The lives of the blind Red Army soldiers took different paths after the war. Pyotr Borisov, Pavel Petrov, Eduard Kem and Vasily Tsyplenkov were demobilisedin March 1942 for medical reasons. Tsyplenkov died of dystrophy. Eduard Kem resumed working at VOS enterprises in Leningrad. We have no information regarding what happened to the other two soldiers.

Musician Ivan Skrobat began his service in January 1942 in the area of the railway station Devyatkino. Two aircraft were downed thanks to his efforts. A few months later, he was shell-shocked and demobilised. After the war, Ivan directed a brass band.

Konstantin Mikhailov had some residual vision. Before the war, he was a worker. In July 1942, he was shell-shocked by a blast that reached his sound detector. He was treated in hospital twice, demobilised and evacuated to the Vologda region. From 1945, he worked at the Leningrad Music School of Accordionists for those who lost their eyesight during the war, and he worked at VOS enterprises.

Gavriil Serebrennikov worked as a piano tuner at the Krasny Oktyabr(Red October) factory. He had perfect hearing and was included in the listeners’ team without medical screening. In June 1942, he was demobilised for health reasons. After the war, he resumed working as a tuner in Leningrad.

Professional historian Igor Zaikin served in the 351st anti-aircraft artillery regiment until 1943. He was awarded the medals “For the Victory over Germany in the Great Patriotic War “For the Defence of Leningrad” and “For Valiant Labour in the Great Patriotic War After the war, he taught history and then worked at a brush factory. He conducted political information meetings and was editor of a bulletin board newspaper. 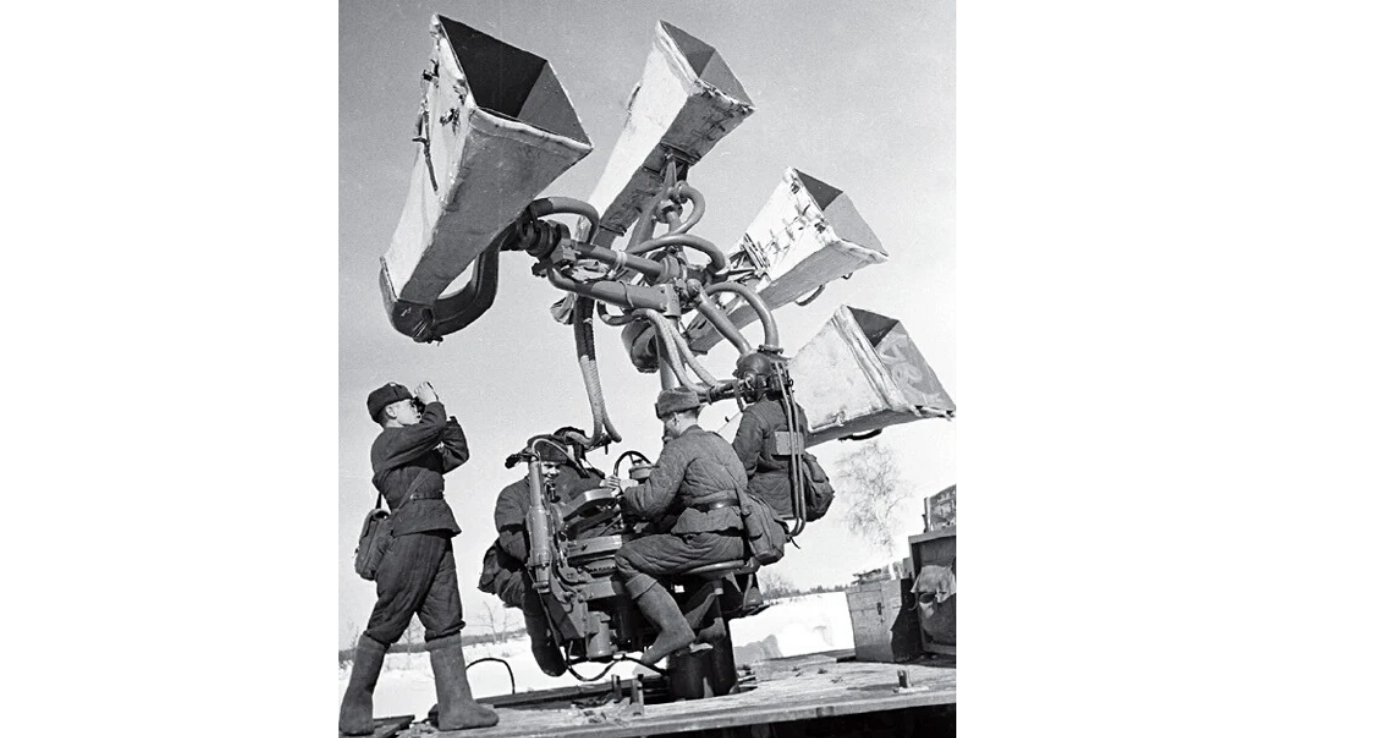 Photo: provided by the People’s Museum of the History of the St. Petersburg Regional Organisation of the All Russia Association of the Blind

Audio description: This is a black-and-white photo. It is a winter’s day. Four soldiers are seated at a four-horned sound detector unit. Another soldier is standing nearby, looking through his binoculars at the sky.

Before the war, Yakov Zobnin worked at the electric motor factory of the All Russia Association of the Blind. As an innovator, he suggested a device that made the labour of the blind easier. Along with other VOS members, he volunteered to serve in the army. Yakov served until the very end of the war. When recommended for the medal “For Battle Merit”, he was characterised as follows: “During his period of service, he proved to be a disciplined and motivated soldier, an accommodating comrade who demanded a lot of himself. Despite being blind, he excelled in mastering the components and operation of the sound detector... He courageously endured all the hardships of military life and set an example in fulfilling his military duty to his Motherland.” Yakov Was also awarded the medals “For the Defence of Leningrad” and “For the Victory over Germany”. After the war, he returned to university and became a lecturer in political economy.

Formerly a worker, Alexey Boyko served through the whole war in the 3rd searchlight company of the 189th anti-aircraft artillery regiment. His comrades-in-arms spoke of him as a cheerful and sociable character and praised his accordion skills. He was the first listener to refuse the help of asighted soldier. Boyko learned to navigate on his own using a system of taut ropes. He was awarded two medals “For Battle Merit”, as well as the medals “For the Defence of Leningrad” and “For the Victory over Germany”. A Red Army hero, he did not like talking about the war. People around him thought he had lost his eyesight at the front, and no one was aware that he had enlisted as a blind man. This soldier’s life story found its way to the novella “I Know the Night” by Viktor Shutov.

Tens of thousands of Leningrad residents were saved from air raids thanks to the efforts of the listeners, who contributed greatly to the smooth operation of air defences and detected enemy aircraft as they approached the city.

Historical materials about the listeners are being collected and stored at the People’s Museum of the History of the St. Petersburg Regional Organisation of the All Russia Association of the Blind (SPb RO VOS). The Museum was founded in 1970. According to Alexey Kolosov, Chairman of the SPb RO VOS, the Museum holds over 4,700 unique exhibits: books, documents, photographs, recordings of speeches, samples of audio description equipment, sculptures, paintings and other historical and cultural items. Here you can also find personal belongings of the listeners, copies of documents, diaries and memories of the veterans.

“The primary mission of this Museum is to raise awareness about the accomplishments of blind people and their ability to live a full diverse life and be productive members of society. The VOS history, captured in the Museum’s exhibits, is designed to inspire a blind person, particularly young one, with confidence in their ability to overcome life’s hardships associated with blindness and find their rightful place in society. The Museum’s section dedicated to the Blockade of Leningrad and the heroic deeds of the blind listeners helps us to fulfil the set task like no other!” says Alexey Kolosov.