On February 11, two tactile models of Saint Basil’s Cathedral (also known as The Church of Intercession of The Holy Virgin) were installed at the premises of this Moscow’s heritage site. Using these models, visually impaired visitors of the worldwide-famous architectural masterpiece will be able to study the church in full detail.

One of the two models of the Cathedral was made of metal and the other of plastic. The former was placed outside the building, and the latter was displayed inside the temple as a part of the museum exhibit. Visitors will be able to dismantle the plastic miniature in order to study its components and inner structure. Moreover, this item is provided with visual description written by Vera Fevralskikh and supplemented with historical data.

These miniature copies of Saint Basil’s Cathedral will be available for individual visitors as well as group tourists with visual impairments. Another model will be neighboring the metal sculpture of the temple, namely a miniature copy of the first Moscow monument, the one dedicated to Minin and Pozharsky (in 1612, leaders of the Volunteer Army, merchant Minin and prince Pozharsky freed Moscow from Polish intervention).

At 3 p.m. on the third Sunday of every month, totally and partially blind visitors will be able to join a free one-hour guided tour To Touch The Intercession Cathedral.

The Intercession Cathedral: Inclusiveness Territoryproject was launched to coincide with the celebration of both the 460th anniversary of Saint Basil’s Cathedral and State History Museum anniversary. The temple models were produced as a part of the “Special View” program which springs from the “Art, Science and Sport” Charity Foundation of Alisher Usmanov. They were manufactured in Olga and Michail Shu’s tactile models workshop. 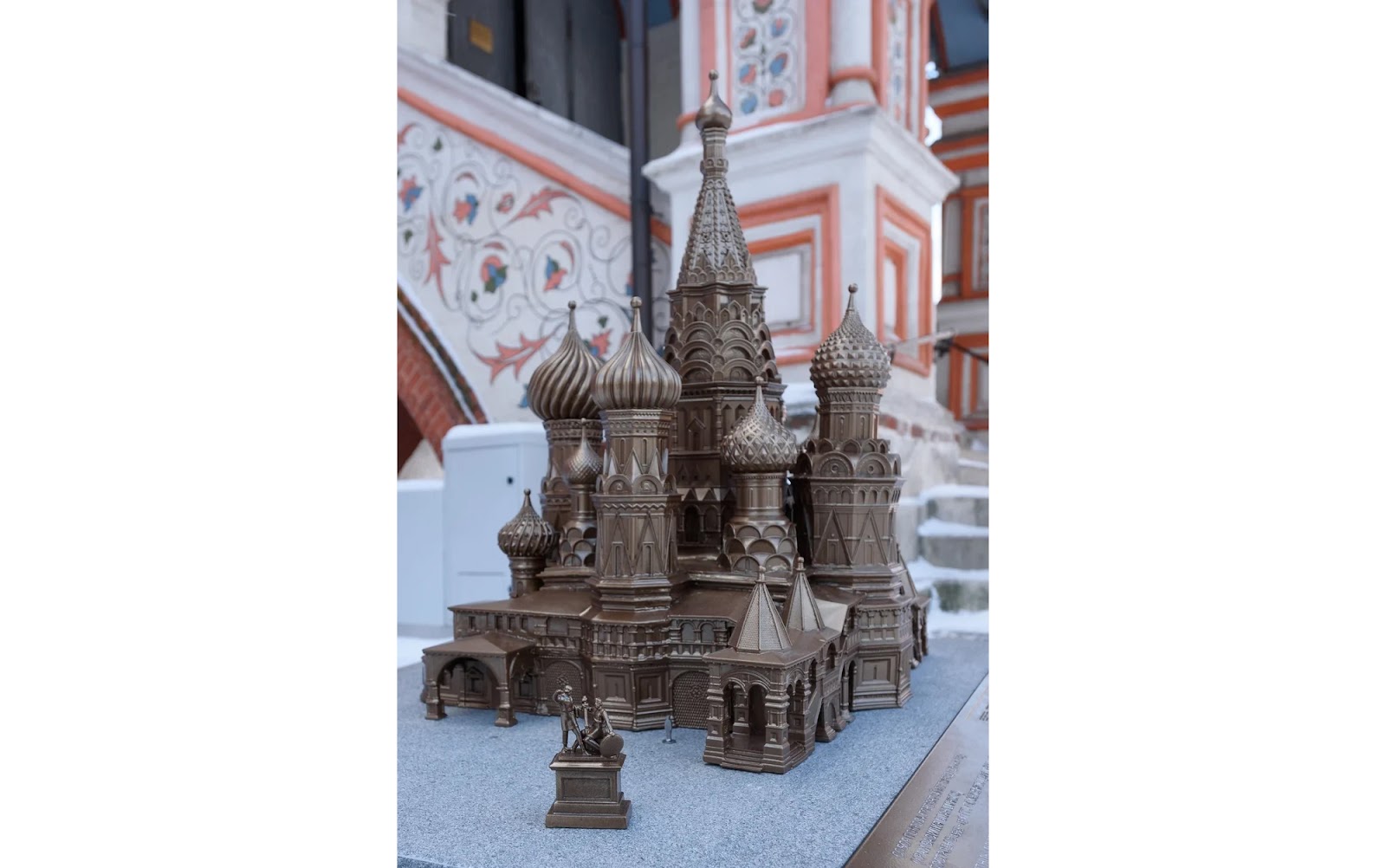 Audio description: a coloured photo. A metal tactile model of Saint Basil’s Cathedral stands in front of the church. The copy is surrounded by miniature sculptured temple premises with a small monument to Minin and Pozharsky.

“The Foundation’s special concern is inclusiveness for visually impaired people, in particular through providing visual descriptions and creating tactile models. The presentation of the Saint Basil’s Cathedral (the Intercession Cathedral) model in Moscow’s Red Square is a significant step to accessible environment, and a perfect opportunity to tell people about the problems of those physically challenged who are often left out of cultural life. The ’new accessibility’ of the Cathedral, a major symbol of Russia, is not just a chance to feel its beauty by touch, but one more step to inclusive society and equal opportunities”, says Fatima Mukhomedzhan, the director of the Charity Foundation.

Xenia Dmitriyeva, the Chief of program the “Special View” of “Art, Science and Sport” Charity Foundation, adds that according to Ministry of Labour and Social Protection data, more than 300 thousand Russian citizens have visual disability, and out of this number 20 per cent are active people who study, work and travel. “Nevertheless, as of today, few architectural monuments are provided with specialized tactile models, and this means that it is still too early to talk about full-fledged inclusive tourism. Regrettably, often it so happens that employees of historical buildings and museums have to manage the problem of accessibility and inclusiveness all by themselves. Museums have to look for funds for such projects unaided. By the opening of the Intercession Cathedral tactile model we would like to draw public attention to adapting cultural sites to the needs of the disabled people, and at the same time reveal the barriers that obstruct creating such accessibility and inclusiveness”, emphasizes Xenia.

It should be noted that State History Museum which includes the Intercession Cathedral has tactile models of key exhibits.