From jogging in a park to international competition: how I prepared for Boston Marathon and run it online. Part 2

Audio description: photo in color. Silhouettes of two women and one man on blue background. Back view. They are running down the smooth asphalt road. The sun is getting down to horizon.

“Special view” publishes the 2ndpart of the article of Elena Fedoseeva, visually impaired sportswoman and journalist, talking about preparation for the Boston Marathon. The 1stpart can be viewed here.

3 months after the Berlin half-marathon I already had a plan of preparation for the marathon, as well as the new trainer, leader and inspiration named Oksana. I met her at the championship in Sochi, where we both went as part of the team of the “Sports for life” charity foundation. Almost at the moment we realized we had been searching for each other and finally found. She, a true lover of long distances, had a dream to run with a visually impaired girl her first ever marathon and to share her happiness from crossing the finish line. And I hoped to meet someone who would dare to run 42 kilometers with a blind sportsman. Oksana planned my preparation, which included both long and interval trainings, when I needed to run distances of different lengths with predefined speed. Since now I had 5 minimum trainings per week, we had to call all my leaders to schedule something like a running duty.

Oksana and I aimed at one of the most known European marathons, which took place in the end of October in Amsterdam. We wanted our travel to the point of destination look like a touristic trip. Besides, the running track should not differ from what we had before in terms of the altitudes and the weather should be as good as possible for running. At the same time, we registered for Moscow Marathon which had to take place a month before the one in Amsterdam. We assumed we would run just part of it and get off the distance, considering this a good, long training, but it turned out not exactly as we planned. We run the Moscow Marathon till the very end, so full length, as it was hard but bearable. We had our friends supporting us along the track, and the bigger part of it Misha, Oksana’s husband, was running nearby, providing us with water and sports gels and protecting us from those runners who tried to cut us off or squeeze between us. 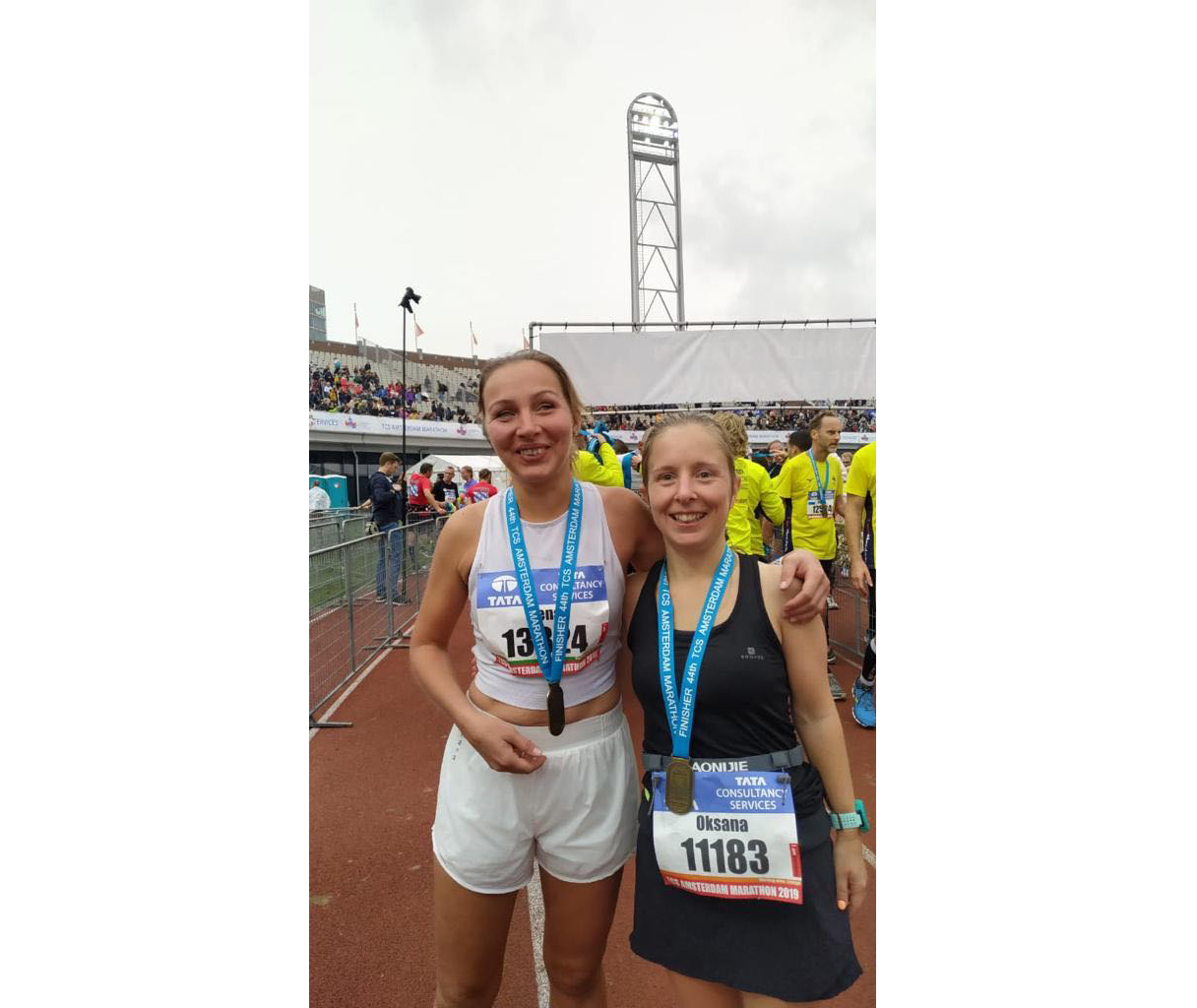 Audio description: photo in color. The participants of the Amsterdam Marathon, Elena Fedoseeva and Oksana, her leader, are standing with the finisher medals on blue ribbons. The sportswomen are hugging and smiling. Oksana is wearing black sports uniform with short skirt, and Elena — white T-shirt and shorts. Both have starting numbers on their chests. There is a stadium with the full stands and other participants seen behind them.

We decided we would run the Amsterdam Marathon in the same team, especially since now we needed not only to finish the distance, but to do this in less than 4 hours and 20 minutes. Those numbers were not routed in our own ambitions, those were coming from the requirements that the famous Boston Marathon, the biggest running event in the world where every runner wanted to go, imposed on those who wished to apply. It is not easy to become one of the participants there. For this you have to run a marathon distance in one of the tracks that are certified and approved by the Boston sports committee, in certain time. The requirements differ depending on the participant’s age. Oksana, who run a marathon in Vienna in 3 hours and 30 minutes, could apply for the Boston Marathon, since for her age the required time was 3 hours and 35 minutes. While filling in the registration form she suddenly found the information about runners with disabilities. According to it, I being a visually impaired woman up to 35 years old had to finish the marathon distance in just 4 hours and 20 minutes, and then I could apply for the Boston Marathon to become part of the biggest running event in the world. The track in Amsterdam was certified, so we just needed to try to run it in the least possible time and then send the result to the organizing committee of the Boston Marathon. 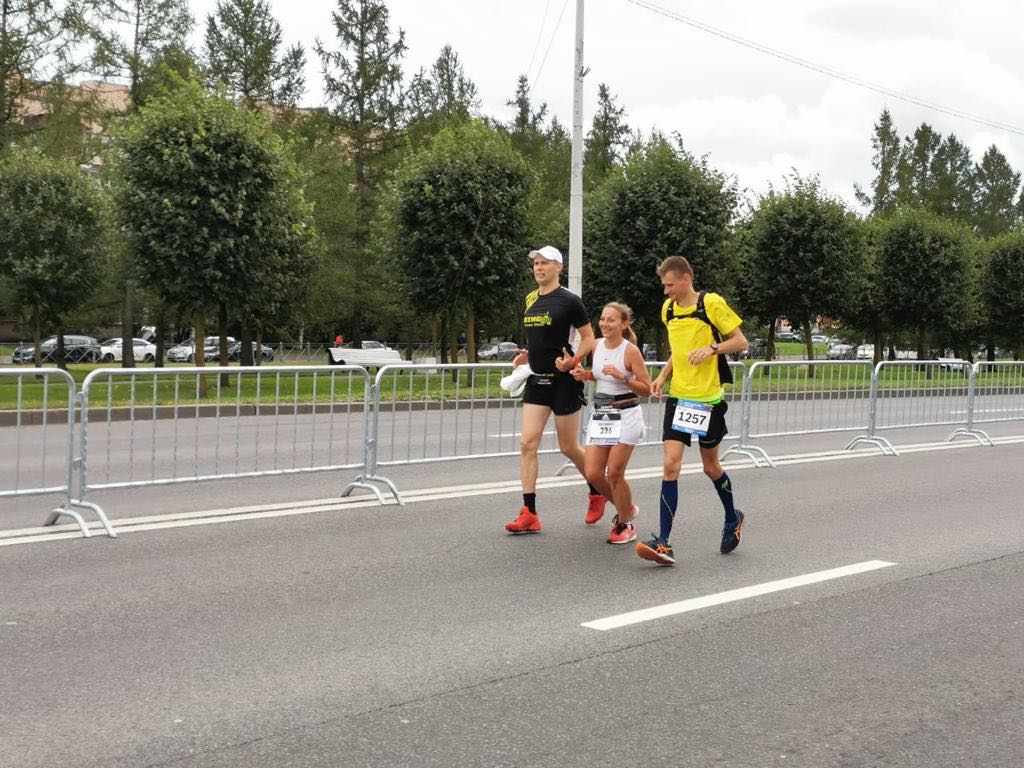 Audio description: photo in color. Bright summer day. Elena is running along the roadway accompanied by 2 sportsmen. The runners are wearing sports uniform with shorts and starting numbers. Elena is smiling. Along the median cut of the road the portable metal fences are placed, and the line of trees can be seen behind them.

We aimed at finishing our 42 kilometers faster than the guidelines required, but were ready to face that this would not be possible and tuned ourselves that only the enjoyment that you got from running mattered. We anyway tried hard and this was where I learnt what the “marathon” or “wall” was, the terms that all experienced runners talk about. The “marathon” is the name for the condition that every runner can come across at any distance. Suddenly he or she feels that he/she cannot run anymore, he/she begins to hate every single person running nearby, the weather, the running shoes, the sportsman just wants to stop here and now as if he/she has a “wall” in front of him/her and it cannot be overcome. This feeling disappears same fast as appears, it is important not to give in and not to get off the distance. This “marathon” condition came to me at the 30thkilometer in Amsterdam, but thanks to Oksana and Misha who we running nearby I didn’t stop and reached the finish line at 4 hours and 11 minutes. This result went into the Russian record book and gave me access to the Boston Marathon.

The whole process of registration to the Boston Marathon was not easy. Apart from submitting the results from the Amsterdam Marathon I had to provide the docs in English stating I am a visually impaired sportswoman and pay a registration fee of few hundred dollars. There is a special team from the Boston Marathon that works with para-athletes and they allowed me to register 2 leaders, each of them got the right to run half of the distance with me. Oksana planned to run the Marathon on her own, so we decided to register her husband Misha and our running comrade Andrey as my leaders. And then another training process started, serious, hard and time-consuming, that required all my running friends to join in again.

In 2020 the Boston Marathon was scheduled for 20thof April, but that spring taught us not to plan anything. When we bought our tickets to Boston and booked our stay there we already heard about COVID-19 starting, but refused to believe that the event that happened at the same time for 124 years might be cancelled. The impossible happened, and 3 weeks before the marathon date all got the letter from the organizing committee saying that for the healthcare reasons the marathon would be postponed until September.

We were disappointed, of course, but could do nothing about this. We returned out tickets, cancelled the booking and sat down to wait for the autumn. The self-isolation didn’t allow me and Oksana to meet to train together, but we continued to do this at home. The bad news was that even in September the 124thBoston Marathon didn’t happen. Well, no. It happened. But it happened online, and the runners who could not go to Boston for clear reasons managed to run their 42 kilometers in their own cities.

It was the first time in history that the Boston Marathon happened in such a way. For this the organizers developed the application for smartphones that let the participants print their own starting numbers and record the results. Multitude packages were sent from Boston to all around the world, carrying sports nutrition that the runners were supposed to get at the distance, and later on medals and memorable Boston Marathon T-shirts arrived.

We had to run the marathon in the time period between 5thand 13thof September, and since we were not really into running four of us in a half-empty park having no food points, or toilets, or running colleagues around, we decided to combine our 124thBoston Marathon with some offline marathon happening on the same dates. We chose the Tzarskoselsky Marathon which took place in Pushkin city on September 6th. We participated with the Boston Marathon starting numbers on our chests, with the agreed team and wearing the running shoes that we kept just for this special moment. For sure, we never expected the main running event would go that way, but instead we took part in the most unusual Boston Marathon ever and saved the dream to still run a traditional, but so long-awaited distance, one day in the future.

We are still determined to make it happen. If the epidemiological situation let us do so, we will try to get to Boston again this year to participate in the 125thanniversary Marathon, especially since the organizers do promise to take into account our results from the last year marathons, with the one in Amsterdam included.